Mars is the first of the four commanders in Team Galactic. She is first met at the Valley Windworks, where she attempts to take it over. She is then at Lake Verity after her plans to capture Mesprit are successful. After story mode in Platinum, Mars and Jupiter face off against the player at Stark Mountain. If you beat them, they will quit Team Galactic. 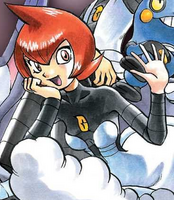