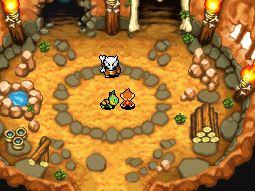 It is composed of training mazes rather than dungeons. There are initially ten training mazes found in the Dojo, listed below. After the credits, the Final Maze will appear separate from these ten. The Explorer Maze will also appear after the credits, but only when the player receives a team from another game over wireless communications. It has only one floor, in which the team received can be battled and recruited.

The dojo and its services cannot be utilized right away. If a player walks up to it and tries to enter it before Waterfall Cave is cleared, they will not be able to. A notice placed there tells them that the dojo is not available for service right then. Waterfall Cave must be cleared in order to access the dojo.

Training mazes are just like ordinary mystery dungeons, except they are much shorter. Each training maze is only five floors in length. Players will not lose any money or items they found if they faint while in the type-based and Explorer mazes, however they must hand over all items in order to enter. The standard item loss criteria is placed on players should they faint in the Final Maze, however.

The mazes contain Pokémon and aesthetic effects that mostly match the type(s) selected. For example, the Dark/Fire maze contains Dark and Fire-type Pokémon, along with terrain and background effects that match those types (lava, black tiles, etc). Pokémon that are partially the type selected may also appear. Such an example is Monferno, which may appear both in the Dark/Fire maze and the Fighting/Psychic maze (as it is a Fire/Fighting-type Pokémon).

The Explorer Maze will contain one to four Pokémon of the sending player's choosing, as they will send the roster of those particular Pokémon over to the receiving player's game.

The Final Maze has a specific set of Pokémon, which includes a variety of species, types and other factors.

At any point in time, the following type-based mazes can be played through as the player desires. Seven of them are dual-type based in order to accommodate 17 types in 10 mazes.

After the player has graduated from the guild, two more mazes are unlocked. They are:

The Final Maze does not have a dominant type, but it does have a specific set of Pokémon.

Retrieved from "https://pokemon.fandom.com/wiki/Marowak_Dojo?oldid=838596"
Community content is available under CC-BY-SA unless otherwise noted.