For the variant appearing in the games, see Marlon.

Marlon is a character appearing in Pokémon Adventures, who is the Gym Leader of Humilau City in the Unova region.

Marlon is a tall man who has wild deep blue hair with a large strand arched over his head and two more stretching from both sides. He also has light blue eyes and deep blue eyebrows. He wears light blue swimming goggles and keeps them around his neck when not in use. Marlon's entire upper body is bare, revealing him to have light brown skin upper body whereas his feet are peachy. He wears a skin-tight, blue and light blue striped swimsuit that starts at his waist forming a V, all the way down to his feet, only covering a portion of his feet separating his heels to his toes. Near his calves, light blue fins stuck out, with two on each leg. Finally, he wears blue sandals.

Marlon is a man that is connected with nature, especially the sea. This gives him the trait to track people and Pokémon's scent.

The name Marlon comes from "marine" (of or relating to the ocean), "marlin" (a type of oceanic fish), and possibly "merman" (a mythical creature that is a human with a fish tail instead of legs.

His Japanese name, Shizui, comes from 滴 (shizuku, droplet), 水 (sui, water) and, following the plant-based naming of most characters, could come from shizui (the Japanese name for bulrush, a type of grass that grows in water-filled areas).

Marlon used to spend a lot of time in the sea. As he met a lot of Pokémon in the ocean, Marlon began to call it his home.[1]

Marlon participated in the Unova Pokémon League, battling trainers to reach the quarterfinals.[2] Per the rules of the quarterfinals, Marlon entered a capsule. He was scheduled to battle the Hood Man.[3] During the third round, Marlon and Hood Man confronted each other in battle. Marlon suspected the Hood Man was strong, and sent Jellicent to battle his Beheeyem. Marlon was psyched to fight such a strong opponent, and had Jellicent grapple his Beheeyem, to which Beheyeem fired Shadow Ball to defeat Jellicent. Despite the defeat, Marlon was glad to have battled such a strong foe. The Hood Man commented that Marlon didn't need to thank him for that.[1]

White stalked Marlon, believing he had some information on the Hood Man. Since Marlon was walking in the corridor carrying his injured Jellicent, White sent Dorothy and Nancy, and the latter healed Jellicent. White pretended that she merely wanted to heal Jellicent, but Marlon saw through her to stop pretending. Still, he was pleased that White wasn't a bad person to send out such cute Pokémon. White admitted the purpose for talking to Marlon, who stated he was no villain, unveiled what he sensed about the Hood Man. Marlon remarked that unlike other participants, the Hood Man entered the League without eight badges, which surprised White.

Marlon stated could smell the scent of the Pokémon, depending on the water that the being originated from, like White's Dorothy from the puddles near Icirrus City or Nancy, who was caught at Route 4. At any rate, Marlon reminded that every participant had to cross a short bridge over a small river, where the participants had to show their Trio Badge. Marlon stated they all bore a scent, which he didn't sense on the Hood Man. White went to report this to the officials, but Marlon stopped her, reminding that a scent wasn't a good enough evidence, and remarked that the Hood Man was a powerful opponent, nevertheless. Before Marlon went to Humilau City, he pointed at Cheren, stating she should be concerned about him, as his heart was closed off.[4]

When he spoke to Grey, the Hood Man noted that Marlon's strength came from the harmory of nature.[5]

Looker reminded Colress how he participated, named as "Lou-Karr", along with Marlon and other participants.[6] Brycen spoke to Cheren and reminded him how he needed to obtain eight badges to participate in the Unova League, just like many challengers had to, including Marlon.[7] Colress recalled how Zinzolin disobeyed Ghetsis' orders and went to the Pokémon League with the other challengers.[8] As Cheren and his students were knocked unconscious, Marlon and Benga brought them to the underwater tunnel - Marine Tube - when the Plasma Frigate started to freeze Unova cities.

Marlon was inside the Marine Tube, scolding Benga, his protegé, for starting a fire inside, as he wanted to show some hospitality. He then met Cheren and the students, noting that the former had an "evil spirit" removed, comparing him to his status in the Pokémon League. Marlon informed them of the flying ship freezing cities. As he had contacted Iris and Roxie for support, he asked of Cheren to help them out. After finding out that Whitley could not speak (thinking it was because of a great shock), he noted that the Plasma Frigate was striking Undella Town.[9] 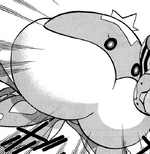