For the variant appearing in the games, see Marley.

Marley is a character appearing in Pokémon Adventures.

Marley is a skinny young girl with very pale skin, short black hair with a white bow in it, and blue eyes. She wears a black and white gothic-style thigh-length dress with white-ended black sleeves that leave her hands, the upper part of her arms, and a little bit of skin just above her cleavage bare, along with black tights and black boots with white cuffs and gray soles.

Marley is a powerful trainer. However, deep down, she is disappointed in the world that cannot have humans and Pokémon coexist with each other, with the recent incidents in Sinnoh region. It is why she sought out a Shaymin, to prove herself wrong that ideal could exist.

Professor Oak got a letter from Marley, who wrote her concern over the rising animosity between people and Pokémon, due to the incident with the Galactic Bomb and the fight atop the Spear Pillar. This conflicted with her viewpoint that people and Pokémon should stop fighting and live in harmony.[1]

Oak wrote a letter back to Marley, acknowledging the words she wrote, and apologized as an adult, since he had to make a better world. However, he asked of Marley not to give up hope, and told her about Shaymin, and told her a way to meet it: to pluck a Gracidea Flower from the Floaroma Meadow. His final words were that she can expect hope through gratefulness.[1]

At the Survival Area, Buck, Marley, Cheryl and Mira had their Claydol, Arcanine, Blissey and Alakazam battle each other. Alakazam used Psychic, Arcanine used Flare Blitz, Blissey used Hyper Beam and Claydol used Psychic against each other.[2]

Marley attended Looker and Buck, who were resting in the infirmary. Mira cried that the two got injured, but Cheryl stated they had to let them rest, and Marley confirmed the former's words, as she was holding onto Professor Oak's letter.[3]

Marley went to a lake, still holding onto Professor Oak's letter, unaware that not far away from her was a portal to Distortion World.[4] Marley was at Route 224. She was holding onto a Gracidea Flower, and reading Professor Oak's letter, she expected a Pokémon to arrive. She asked for its help, as they were in a need currently. A bush with flowers appeared, which Marley recognized as Shaymin.[5] Marley saw Flint and Volkner going to Turnback Cave. She followed them, but got captured by a Team Galactic grunt. When Platinum, Pearl, Riley, Mira and Cheryl arrived, the grunt released Marley, and explained that he thought she came as a hitman. He explained that he defecated from Team Galactic, to which Marley sensed he was being frightened.[6]

While the group was walking, Mira and Cheryl asked Marley why was she here, to which Marley explained she was investigating Professor Oak's letter, and found Shaymin. The former Team Galactic grunt took them to the portal. Mira, Cheryl and Marley crossed through, and got separated from others. Suddenly, they heard a voice: Charon, who spoke about healing his Heatran, to which the girls realized that he had attacked Buck. As Charon visited the Team Galactic commanders, he let them confront Cheryl, Mira and Marley.[7] Marley fought Jupiter, whose Tangrowth used Natural Gift. Marley was overwhelmed, as Jupiter was switching berries to swarp the Natural gift's type from Electric to Water and even Rock. However, Platinum gave Marley the Vs. Recorder, so Marley had her Arcanine evade the attack. Jupiter sensed Marley was even predicting her moves, as Marley read on the Vs. Recorder which type the Natural Gift move could switch, depending on the berry.[8] Their battle got interrupted by Giratina, who passed by them. Marley also noticed Shaymin having gone atop of Giratina's head.[9] Without further ado, Marley and Arcanine went back to Palmer and the rest, and were annoyed that Giratina interrupted their battle. They remained behind to watch the Legendary Pokémon battle each other. Marley read the letter from Professor Oak, and noticed that Shaymin's flower was blooming. She passed the Gracidea Flower to Shaymin, causing it to shift form and chase after Charon and Giratina.[1]

Cheryl, Marley and Mira emerged from the Distortion World, through the portal at Sunyshore City, and were glad to have reunited with Buck, who had recovered. With the conflict over, Marley let Shaymin stay in her team.[10] 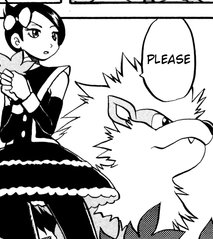 Retrieved from "https://pokemon.fandom.com/wiki/Marley_(Adventures)?oldid=1227432"
Community content is available under CC-BY-SA unless otherwise noted.