Pokémon Trainer
Marley is a character who first appears in Diamond and Pearl, where the player meets here on Route 224 after defeating the Elite Four and Champion. She asks the player to escort her to the exit because she just wants to tag along. She can later be found in Sinnoh's Battle Tower tagging with the player in Platinum in Multi Battles. Her Pokémon excel in Speed.

Marley is a skinny young girl with very pale skin, short black hair with a white bow in it and blue eyes. She wears a black and white gothic-style thigh-length dress with white-ended black sleeves that leave her hands, the upper part of her arms, and a little bit of skin just above her cleavage bare, along with black tights and black boots with white cuffs and gray soles.

At a glance, Marley appears to abstain from talking purely out of shyness. However, this is not the case- in reality, Marley doesn't like to talk because she's afraid of hurting people on accident, even though she always chooses her words carefully. As a result, she "clams up" whenever she thinks about it. However, when the player character defeats Marley in battle, she heavily implies that she enjoys spending time with them (though she claims that she only likes battles a "little" before clamming up and saying that she likes them a "tiny" bit).

Marley is one of five Trainers who can join with the player character during an event in Pokémon Diamond, Pearl, and Platinum. She first appears in a part of Victory Road only accessible after defeating the Elite Four. Despite her reserved nature, she appears to be fond of Shaymin and wants to inspect the stone tablet at the end of Route 224 in hopes of meeting it.

Later, she can join the player in competition at Sinnoh's Battle Tower. In Pokémon Platinum, she is also a possible opponent in the Battleground. 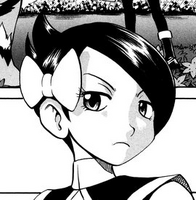 Retrieved from "https://pokemon.fandom.com/wiki/Marley?oldid=1382233"
Community content is available under CC-BY-SA unless otherwise noted.