Mareanie looks a lot like Jame's head, except it has spikes on its hair, and sharp teeth.

Mareanie is usually found moving along the ocean floor near coastal areas. The spike on top of its head contains a deadly toxin that is injected into prey. Mareanie is also able to finish off its weakened victim with all ten of its tentacles.

Mareanie comes from "marine", "meanie", and possibly "echinoderm". Parts of its name may also be taken from "sea anemone". 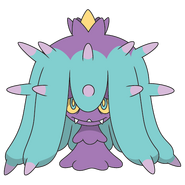 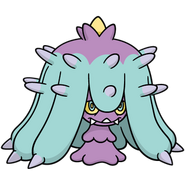 Add a photo to this gallery
← Wishiwashi | Mareanie | Toxapex →
Retrieved from "https://pokemon.fandom.com/wiki/Mareanie?oldid=1171936"
Community content is available under CC-BY-SA unless otherwise noted.