This Vigoroth is a normal-type Pokémon owned by Marcel.

Snorlax was eating Slakoth's bananas, which made one particularly angry. Marcel was asking for volunteers and that Slakoth stepped out to battle Snorlax. Slakoth battled Ash's Pokémon and used Counter against Pikachu's Quick Attack, evaded Torkoal's Flamethrower and used Scratch to negate Grovyle's Leaf Blade. After some more training, Slakoth evolved into a Vigoroth. Soon, Vigoroth faced Snorlax, who started off with Yawn. Vigoroth was not affected by the move, having Vital Spirit as an ability to prevent it from sleep effects, then scratched Snorlax. Vigoroth dodged Snorlax's Hyper Beam and scratched it. Vigoroth used Focus Energy and just as Snorlax was to defeat Vigoroth with Body Slam, it got hit away by Focus Punch. Using the Poké Ball, Marcel caught Snorlax and cheered with Vigoroth, as their problems were finally over. 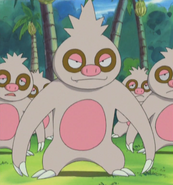 Vital Spirit activated
Add a photo to this gallery
Retrieved from "https://pokemon.fandom.com/wiki/Marcel%27s_Vigoroth?oldid=1239227"
Community content is available under CC-BY-SA unless otherwise noted.