Marcel is a character appearing in Pokémon: Advanced Challenge.

Marcel is the owner of the Banana Slakoth Garden, a theme park. However, one day, a Snorlax came and started eating the bananas meant for the Slakoth. Marcel panicked and couldn't do anything about it. The heroes, who wanted to see the theme park, were taken into the restaurant by Marcel, who explained about the Snorlax incident. The heroes decided to help him out and Ash battled Snorlax. However, Snorlax took no damage and lulled everyone to sleep with Yawn. Instead, the heroes contacted Professor Oak, who advised them to battle Snorlax with a Pokémon that is immune to sleep. Therefore, Marcel had one of his Slakoth train with Ash and evolved it in a Vigoroth. Vigoroth battled Snorlax bravely, allowing Marcel to catch it. The theme park was reopened and Marcel, who gave the heroes a cake as a reward, even used Snorlax to put everyone to sleep to Yawn for relaxation. 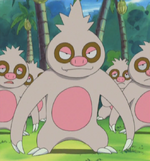