Maractus is a small plant-based cactus-like Pokémon, as its name suggests, with a somewhat feminine appearance. It has two ear-like extensions protruding from its head that end in lavender flowers. They have three yellow thorns on them similar to one on the middle of Maractus' forehead. It has yellow eyes and a zigzagged w-shaped mouth. Its main body is made of two shades of green (one shade lighter or darker than the other, the light being the main body color and the dark being the secondary), and ends in either a single star-shaped foot or what appears to be a star-shaped bush. It has mid-sized arms that end in a sort of dark green frill before the hand. Its hands each have three yellow claws similar to its thorns.

Maractus usually shake themselves to fend themselves by startling bird Pokémon through their rhythmic dances and body movements, as well as producing a sound similar to a maracas. They scatter their seeds once in a year.

Their seeds are full of nutrients, which can be a precious food source that can benefit survival in deserts.

Maractus dwell in dry and arid areas, such as deserts.

Maractus does not evolve.

Maractus is based on a cactus, more specifically a flowering prickly pear cactus. This resemblance is more prevalent in its Shiny coloration in which it sports magenta markings, the color of a ripe prickly pear fruit. Its movements of dancing and shape may also take inspiration from maracas and Spanish dances originating in the southwestern United States or Mexico. Its abilities also reference cacti as Chlorophyll raises its Speed in harsh sunlight (referencing how cacti often grow in hot desert areas) and both Water Absorb and Storm Drain utilize Water-type moves (referencing how cacti often store water inside them).

Maractus comes from maraca and cactus.

Its Japanese name, Marakatchi, seems to be a portmanteau of maraca and mariachi (a type of music that originated in Mexico). 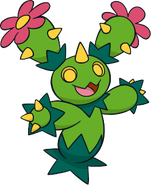 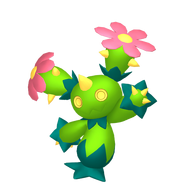 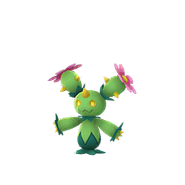