Mandibuzz is a birdlike Pokémon that resembles a vulture or buzzard. Its head and neck are featherless and pink, with a gray beak, while its body is covered in dingy brown ruffled feathers. It has slightly squinted eyes with dark eyeshadow-like markings and red pupils, and it appears to be grinning mischievously, giving it a sinister look. It has a ponytail-like tuft of feathers atop its head, adorned with a small bone. It has a sandy brown ruff of feathers around its neck, and a skirt made of bones around its waist. Its legs and talons are pinkish with sharp black claws.

Mandibuzz is a female-only species of Pokémon. Braviary is its male counterpart.

Mandibuzz are both scavengers and hunters, often seen circling the skies in desolate badlands. Their use their keen senses of sight and smell to locate weakened or sick prey. When they find food, they will circle around their victims before diving in. Mandibuzz then carry their prey back to their nests. These Pokémon have an affinity for bones, which they collect to decorate their own bodies as well as build their meticulously crafted nests—ominous-looking piles of bones in badlands are almost invariably abandoned Mandibuzz nests. Many of these bones will invariably be those of Cubone and Marowak, due to their shared penchant for bone-collecting. They will root through carcasses already picked clean of flesh by other scavengers for desirable bones. These Pokémon are often regarded as omens of death in popular culture; the sight of a Mandibuzz circling overhead in a barren wasteland is a harrowing symbol for tired travelers, indicating that the end is near.

Despite their opportunistic natures, these Pokémon are quite maternal and will adopt orphaned Vullaby from other mothers and raise them as their own. Mandibuzz were one thought to adorn bones to attract mates, but it is now it is more commonly believed that they serve simply as protection. Still, populations of Mandibuzz do seem to observe some form of "fashion trends" when it comes to bones, with different types and methods of adornment falling in and out of style over time.

Mandibuzz (as well as Vullaby) have abnormally strong stomach acids that allow them to consume rotting flesh without becoming ill.

Mandibuzz is the evolved form of Vullaby as of level 54.

Mandibuzz is based on a New World vulture, most likely the turkey vulture based on head color. As opposed to Braviary's influence being on the modern nation of America, with some influences from pre-historic America, Mandibuzz seems to be based off barbarians or a "cavewoman". Its behavior and gender ratio could be inspired from harpies. The jawbone that it wears resembles an apron.

Mandibuzz comes from "mandible" (the name for the lower jawbone) and "buzzard".

Its Japanese name, Barujīna, comes from "vulture" and regina (Latin for "queen"). 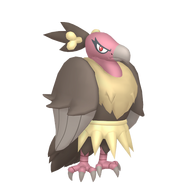 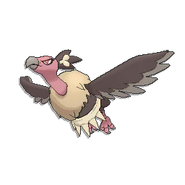 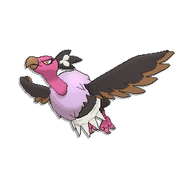 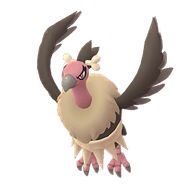