Mamoswine looks like a woolly mammoth and has two tusks. The tusks are much larger than those of Piloswine and seem to be shifted downward. It has a blue colored face mask around its eyes with a white rim. Its fur is mostly brown in color except for the area around its nose, which is a dark shade of cream color. Its snout is similar to that of a pig. Its feet are black with three toes on each foot.

The tusks of the male are larger than those of the female. The tusks are made from solid ice instead of dentine like most teeth are.

Mamoswine first appeared in the 11th movie, Giratina and the Sky Warrior as a huge herd where it was commanded by a Regigigas.

Dawn owns a Mamoswine which evolved from a Piloswine in A Breed Stampede!. 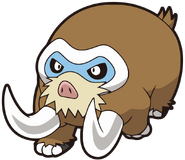 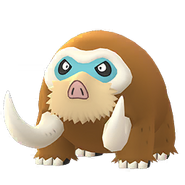 Mamoswine in Pokémon GO
Add a photo to this gallery