For the variant appearing in the games, see "Malva".

Malva in other languages

Malva's Mega Charm.
Malva is a character appearing in Pokémon the Series: XY and XYZ and the Mega Evolution Specials, who is a member of the Elite Four in the Kalos region.

This section, or a part of it, has been transcluded from "Malva"; any changes involving it should be made there instead. /

Malva has slightly tanned skin and a pink hair with a ponytail and curls on her shoulders. Her eyes are hidden behind a pair of red-shaded sunglasses. She wears a black turtleneck that cuts of at the navel and red and black jeans with several diamond shaped cut outs at the front revealing some parts of her legs, as well as black high-heeled shoes. In addition, she wears an Mega Amulet around her neck.

Malva is a passionate person, who tries to persuade people, hence why she is also a TV newsreporter. Malva is also ruthless in battle, pushing her Pokémon in offense to attack her opponents. Malva seemed to be very fond of Lysandre at first. After witnessing how much Ash and Alain wanted to stop his evil plans and save the Kalos region from destruction, she turned against him and decided to join them in their battle.

Malva was seen on television, reporting Professor Sycamore came to Anistar City to do research on the crystal sundial.[1]

Malva first appeared when she was talking to Lysandre if Alain would able to defeat all ten trainers with Mega Pokémon. She also asked why Lysandre was interested in Alain which he responded with that she would she see it when she would battle him. After Lysandre left temporary when there were quests for him, Malva continued to watch the battles Alain was facing. When Alain defeated nine trainers, Malva appeared and introduced herself to Alain to be his final opponent. Malva used her Houndoom and Mega Evolved after Alain's Charizard Mega Evolved and used Flamethrower on Houndoom, who was unaffected due to Houndoom's Flash Fire ability. Malva asked Alain several questions during the battle but Alain claimed that it was none of her business. After a though battle between Houndoom and Charizard, Houndoom was defeated by Charizard's Blast Burn. Malva recalled Houndoom and congratulated him on defeating all ten trainers. Malva was later talking again with Lysandre and said that he was a bad man for using a pure person like Alain. She later stated that she did understand why Lysandre was interested in Alain and left his office.[2]

With Team Rocket has her camera crew, Malva came to Kalos League as a news reporter. She interviewed Ash, wondering if he was going to compete in the League. Ash confirmed that and promised to aim high to win the tournament.[3] She reported to the TV news about the Kalos League, in which she showed some of the battles the trainers had thus far. Later on, she tried motivating her camera crew to interview in the "Pokémon League of Fierce Fights", which made Team Rocket devastated.[4] Malva continued watching the battles and had Team Rocket film the battle of Sawyer vs. Ash.[5][6]

The day before the Kalos League finals, Malva came to Alain and congratulated him on coming thus far. Malva thought Alain participated in the League to become the strongest and also thought he'd easily win the finals. Alain denied that, since he came to battle with Ash. Malva was interested to hear that, since Ash would be quite glad to hear Alain thinks on him all this time. Alain asked about Malva's intentions, but she ignored the question and asked what would he do once he collects the Mega Evolution energy to cure Chespie. Alain thought for a moment and claimed it was none of her business. Malva smiled, claiming it really was none of her business. She also came to Team Rocket and forced them to edit the footage, since they'd have to make the broadcast soon. Team Rocket grudgingly accepted her task, but also had their own plans the next day. Malva, along with Team Rocket, were present the next day to film the final battle.[7] Malva was watching and reporting the Kalos League finals. She also told Team Rocket to follow her, to get a better look at the battlefield.[8] Malva continued reporting the battle. In the end, after Alain won, Malva commented there were no winners nor losers, since he and Ash have brought an honorable feeling to the audience that watched the battle.[9]

The roots spouted throughout Lumiose City, which made Malva sad, as she knew that was Lysandre's doing. Much to Team Rocket's surprise, Malva dismissed them, claiming she had to do something important.[10] Malva turned against Lysandre and had her Mega Houndoom stop Mega Gyarados' Hyper Beam. While she admitted that while she, too, was not satisfied with the world as it was now, watching Alain and Ash inspired her and convinced her that as long as they, the adults, were able to teach the younger generation to lend a helping hand, the future was, therefore, worth fighting for. Lysandre merely rebuffed her and told her that, if that was her decision, she should perish along with Ash and Alain. Later on, Malva was visibly impressed by Ash when he lectured Lysandre on why the current world is worth fighting for and watched as Z-2's control was dispelled.[11]

Malva watched as Ash and Alain defeated Lysandre, who jumped off the Prism Tower. Malva became shocked by the turn of events and kneeled down. Still, she joined others to destroy the Giant Rock and sent Houndoom out.[12] Malva joined in the fight against the Giant Rock, having Mega Houndoom fire Flamethrower to destroy the plants before being held by the roots, along with Professor Sycamore. Once Chespie was rescued, Malva had her Mega Houndoom launch an attack, which fused with others' attacks to destroy the Giant Rock, but failed. Malva continued watching the events, as Zygarde fused and defeated the Giant Rock and Lysandre. In the end, she told Steven she would hunt down the remaining Team Flare members before turning herself in to Officer Jenny[13]

Ash remembered Malva and her Houndoom fighting the Giant Rock with the rest when he was reflecting back on his journey.[14] 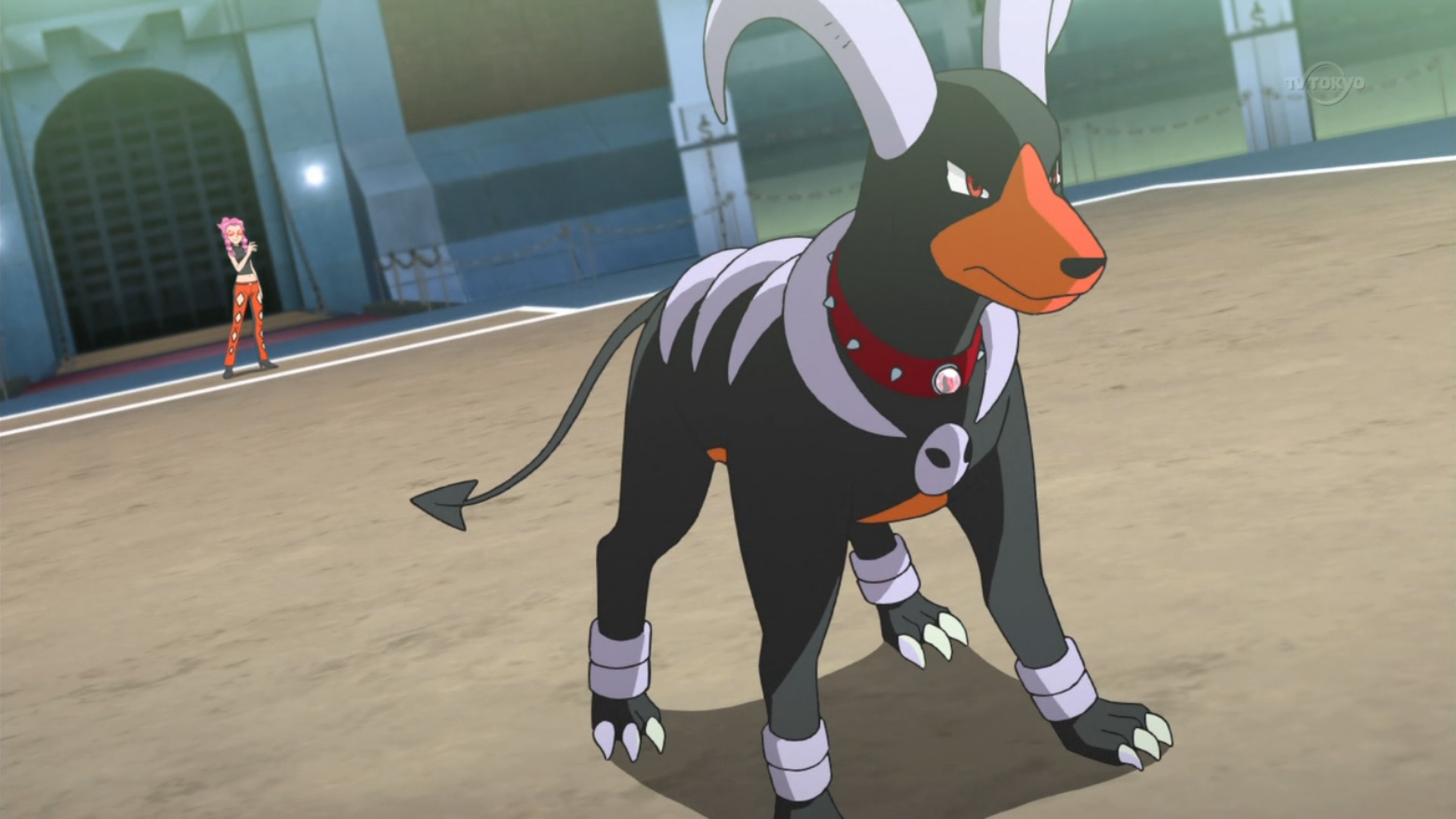