For the variant appearing in the games, see Mallow.

Mallow is a character appearing in Pokémon Adventures.

Mallow is a girl with tanned skin, who has a pink flower in her green hair and has green eyes. She wears a pink sleeveless shirt with light teal overalls. She wears light teal denim shorts and green shoes with small dark green bows. She also has a golden clover-shaped badge on her waist.

Mallow cares deeply for the Island Challenge, and does not tolerate people that desecrate that tradition.

Mallow appeared alongside Kiawe and Lana on Akala Island. They introduced themselves to Sun and Moon, the former being the Island Challenge participant. They wanted to know more about the participant and challenge him to find if he is worthy as the Island Kahuna have placed him, since nobody took on the Island Challenge for years. Mallow and Lana watched the battle between Kiawe and Sun, the latter stating he would've been awarded for the job the Island Kahuna gave them. Mallow was offended that Sun didn't care for Alola traditions, but Sun merely stated he would put his heart for this job as a courier. After Kiawe's intrruption, Mallow yelled at Kiawe for not continuing the battle, but Kiawe and Sun both noted the latter would've won anyway.[1]

Mallow sat with Moon and Lana, as the latter explained more about Brooklet Hill. As Sun went with Lana to that place, Moon accompanied Mallow to search for the Mirage Berry in the Lush Jungle. Mallow was slightly worried for Moon's well-being, but Moon claimed she was fine on the field research. Suddenly, Mallow noticed a powder falling, as she and Moon saw Tapu Lele fighting a tentacled being from the crack of the sky.[2] Mallow watched as a monster started emerging from the crack in the sky. To stop that, Moon had used a bow to knock an arrow to catch the monster. However, the monster escaped, which displeased Mallow. Since Tapu Lele knew more about the monster, Moon suggested they should seek it out, which shocked Mallow for such a dangerous idea. Moon reminded her about the Island Challenge and their need to find the Mirage Berry; Mallow wondered if someone else knew about the "cable-bundle looking thingy" to calm down Tapu Lele's rage. Since Moon stated that was too long for a name, Mallow claimed they could name it "Lightning", which Mallow accepted.[3]

Mallow continued the search with Moon; Moon knocked her arrow to drop some berries off the trees, and Mallow was amazed by her knowledge of the berries. Mallow slapped her back, thinking she Moon could help her finding the berries for her cooking. Moon claimed she would've helped if they weren't in a rush, and wondered would Mallow test Sun in a Trial. Mallow admitted she wouldn't test Sun, since Olivia, whom Mallow trusted, approved Sun for the Island Challenge. Continuing on, Mallow noted they were walking in circles. Moon, who was deep in thoughts, glared at Mallow, who was startled by her frightening look. While Moon apologized, Mallow wanted to "ask the jungle" to find the Mirage Berry. Mallow thought the Mirage Berry could not be found easily, and had Moon send her Pokémon, in addition to her Steenee, to ask the wild Pokémon. Moon asked if it was an okay move; Mallow confirmed this, as she always had her Pokémon help her find stuff, and shared some bread she made with berries. Moon told Mallow she doubted a berry could calm down the Tapu Pokémon's anger, for even Hala did not know why the Tapu Pokémon were enraged. She believed the answer was the creature they saw fighting Tapu Lele. Mallow thought they simply need to communicate with the Tapu Pokémon, since Tapu Koko did bring Sun the Sparkling Stone, and saved Moon from falling off the bridge. She thought the Tapu Pokémon wanted to tell Sun and Moon something, who need to give the berry to find that out. As the Pokémon brought a lot of berries, Mallow and Moon searched through the pile. While Moon found the berry, Mallow got a call from Kiawe, reporting he was attacked. The two met up with Sun and Lana at Konikoni City, where Lana announced Sun passed the Trial. The group went to Memorial Hill, where they traced Kiawe's mobile phone signal to find him. However, they were ambushed by Team Skull grunts. Mallow knew these were the ones that beat Kiawe up, and sent her Steenee, along with Lana's Araquanid to fight them.[4]

Mallow continued fighting the Team Skull grunts. She had Steenee use Stomp to prevent the enemy from attacking Sun, Moon and Kiawe.[5] After the group returned, they met up with Lana and Mallow, who managed to tie up the Team Skull grunts to a tree.[6] As Moon expressed her desire to grow stronger to battle the strange creature, Mallow had an idea. She cooked up a soup, which attracted a Totem Lurantis for Moon to fight. Mallow watched Moon battle the Totem, and congratulated her on the victory. After the group met up with Professor Kukui, they went to Mallow's restaurant, where Kukui contacted his wife, Professor Burnet. The group exchanged information about the strange appearances of creatures around Alola from a crack in the sky, where Mallow and Moon added they faced an creature emitting electricity. They also noted Lillie's Nebby has some connection towards these appearances. Mallow wondered if Team Skull was behind this threat, and while Kiawe doubted Team Skull was smart enough to orchestrate that, Lana believed it was why they hired the new enforcer for their organization. The group thought these creatures could likely be Pokémon, and the crack in the sky was the other dimension. After the meeting was held, Lana terrified others with her threatening look, as she wanted to infiltrate Team Skull's hideout and speak to the grunts. This terrified Kiawe, who went to call his job to tell he was going to be absent, displeasing Mallow that Kiawe thought of his job first. Regardless, Mallow thought of contacting Ilima and Acerola for help.[7]

Sun thought of Lana, Kiawe and Mallow upon seeing Acerola's badge, an another Trial Captain, who saved him and Lillie.[8] The trio went to Wela Volcano Park, where they spoke with locals about Team Skull's base. Once they went away from it, they found Team Skull grunts battling Aether Foundation employees, and joined in the fight to help the latter. Once Team Skull was defeated, the Trial Captains learned of their hideout, located on Ula'ula Island, in a shady house. Mallow contacted Ilima, asking him to join them on Ula'ula Island to take down Team Skull, as she, Kiawe and Lana sailed to that island, with Acerola awaiting them at the docks.[9] Acerola took Kiawe, Mallow and Lana to Po Town, where Team Skull's headquarters were located. Ilima and Hau joined the group near the town, and the former explained the latter had considerable persuasion skills. Mallow and the rest came to the shady house, where Team Skull grunts blocked their path. Lana was aggravated, but Mallow held her back, as the group requested Guzma's presence. Guzma arrived with Plumeria, and accepted their proposal, if they could battle their way out of the impeding danger, for three strange creatures surrounded the Trial Captains and Hau.[10]

Mallow and her Pokémon fought the mysterious creatures, which Guzma named as Ultra Beasts. She was glad to see Sun, and pointed out these Ultra Beasts had a red aura, much like the Lighting she faced with Moon earlier, and thought Kahili faced them, too.[11] Mallow watched as Gladion confronted the Ultra Beasts with his Type: Null. She was surprised to hear Type: Null was created by the Aether Foundation, and didn't trust his words that its president, Lusamine, gave the Ultra Beasts to Guzma. She assumed Gladion was lying, since the Aether Foundation employees even helped her and others in battling against Team Skull. Mallow watched as more Ultra Beasts came out, one of which she and Moon faced before, Lighting. After the battle was over, Gladion ignored them and went after the Ultra Beasts, who have gone off; Kiawe, Mallow and Acerola contacted Molayne to tell him about the danger, for many people evacuated to the Hokulani Observatory. Sophocles took the call, and swore he'd confront the Ultra Beasts with his new device, while Mallow, Kiawe and Acerola realized they didn't invite Sophocles to join in the fight. They swore to contact Sophocles to give him the location of the Ultra Beasts. Thus, Mallow and the other Trial Captains decided to pursue the Ultra Beasts.[12]

When Faba was describing how much resources the Aether Foundation had invested in summoning the Ultra Beasts, he thought of Hau and the Trial Captains, who meddled in those affairs in Po Town.[13]

With the arrival of the Ultra Beasts on Poni Island, Mallow started her training to fight them.[14] She was on Exeggutor Island, when Mina, the final Trial Captain, arrived. As Hala was busy with other things, he put Nanu in charge of training the Trial Captains, but Mallow doubted if he could be a leader model to them.[15] Under Nanu's supervision, Mallow was training by battling Kiawe.[16]

At Hokulani Observatory, Mallow was pleased to see Kiawe having gotten his Z-Ring back. Sophocles led Mallow and the rest to the Vikavolt airship, which he redesigned from the machine that could summon Totem Pokémon. Mallow called it a failure, so Sophocles' Togedemaru electrocuted everyone to go inside. Inside, the group revised that the crack in the sky had been opened at Mount Lanakila, and suspected that Sun and Moon came out. Molayne reminded they would have to fight the Ultra Beasts, but exclaimed the importance of rescuing Sun and Moon out of there. Suddenly, the airship got hit. Mallow told that she knew it would crash, but Sophocles pointed out they were attacked by the Ultra Beasts, and the Aether Foundation employees.[17] With the arrival of the four Guardian Deities, Mallow went out of the aircraft and started to battle the Ultra Beasts. She confronted Pheromosa, and had her Tsareena use Stomp, Trop Kick and High Jump Kick to hit Pheromosa. Next, Mallow passed the Z-Power onto her Tsareena, having her use Bloom Doom, which defeated Pheromosa.[18]

Several months after the Ultra Beasts threat had passed, Hau opened a Malasada and Tapu Cocoa shop with Guzma and Mallow. The latter also had a special recipe to give to Moon, who would soon move in to Alola region.[19] 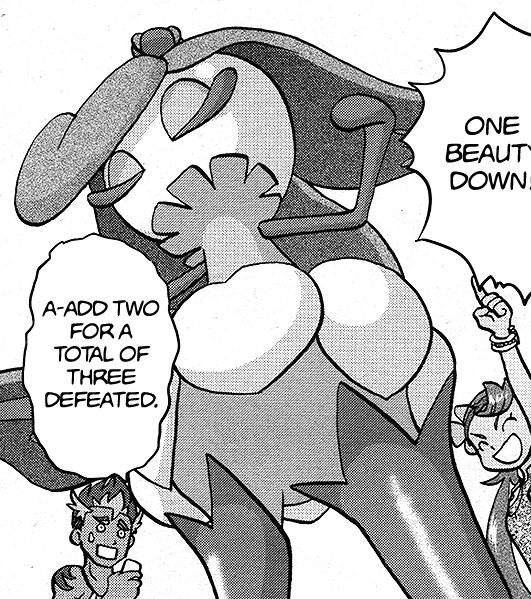 Retrieved from "https://pokemon.fandom.com/wiki/Mallow_(Adventures)?oldid=1189542"
Community content is available under CC-BY-SA unless otherwise noted.