For other versions of Tsareena belonging to Mallow, see Mallow's Tsareena.

Homecoming and the Brilliant Professional Golfer

This Tsareena is a Grass-type Pokémon owned by Mallow.

Mallow and Tsareena spent time on Exeggutor Island for training, and battled against Kiawe and Marowak.[5] With the arrival of the four Guardian Deities on Poni Island, Mallow went out of the aircraft and started to battle the Ultra Beasts. She confronted Pheromosa, and had her Tsareena use Stomp, Trop Kick and High Jump Kick to hit Pheromosa. Next, Mallow passed the Z-Power onto her Tsareena, having her use Bloom Doom, which defeated Pheromosa.[6] 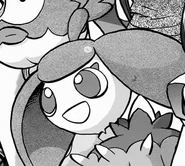 As Steenee
Add a photo to this gallery

Retrieved from "https://pokemon.fandom.com/wiki/Mallow%27s_Tsareena_(Adventures)?oldid=1288211"
Community content is available under CC-BY-SA unless otherwise noted.