Mallow is a Trial Captain that specializes in Grass type Pokémon. She appears in Pokémon Sun and Moon.

Mallow is a slender and slightly tall girl with tan skin, long green hair kept in two tree-shaped twintails, and light green eyes. Her most noticeable feature is the fake pink flower in her hair, which she holds in place with green vine-like straps. Clothing-wise, Mallow wears a pink tank top, light gray overalls with spiky white frills, a white clover-shaped mark on the waist, and a berry-storing pouch above the bust, and green and white shoes with small dark green bows. She also keeps a golden clover-shaped badge on her waist just above the white clover-shaped mark.

Mallow is a very upbeat and cheerful young lady, who happens to be the 3rd Akala Island Trial Captain. She is a skilled user of Grass type Pokémon, and loves making food related metaphors as you converse with her. She appears to have a great relationship with Akala's other Trial Captains, as they are not hesitant to try "The Mallow Specialty", the result of a series of tasks required to face her powerful Totem Pokémon.

The name Mallow may come from the "mallow" family of plants.

Her Japanese name, Mao, may come from ma'o, the Japanese name for Hawaiian cotton. It may also be a corruption of "mallow", as stated in her English name. Interestingly, cotton is part of the mallow family of plants.

Mallow is the 4th Trial Captain and the 3rd Akala Trial Captain. She can be found at Paniola Ranch and talks about Tauros. Then she tells the player character to find four items for her with Stoutland to do the first part of the trial. When finding it, she comes at the spot where the player character is and takes them back to the starting point. She makes soup with the four ingredients, and Kiawe and Lana come running. The soup is meant to draw out the Totem Lurantis. Once the Totem is defeated, Mallow hands over the Grassium Z.

One can battle her later in the game in Pokémon Moon.

Mallow in Pokémon the Series (anime) 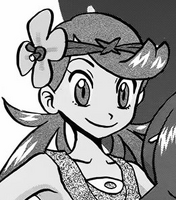 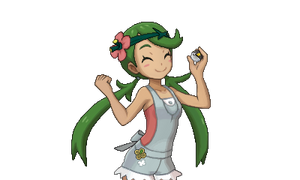 Mallow's VS sprite in Sun & Moon