Malamar is an amphibious Pokémon that resembles an upside-down squid. It has sinister-looking yellow eyes with light purple eyelids that have a squinted appearance. It has a magenta beak for a mouth. Malamar has a fringe of bluish tentacles sprouting from its head, and an oblong deep purple body with yellow patches and spots that form a pattern on its belly. Two long arm-like tentacles sprout from its shoulders; they are magenta and pastel purple in color, with white fins at the tips. Malamar stands upright on two large white sharp-edged fins on either side of its lower body, which it uses as legs.

Malamar use the flashing lights like an anglerfish to lure prey in and ensnare them before eating the prey. They are in fact masters of manipulation, because of their ability that enables them manipulate those who see them into doing their bidding.

In civilized society, their powers pose far more sinister applications; there have been confirmed cases of Malamar controlling people serving as judges, police officers, and high-ranking officials in criminal groups—most notably Team Plasma. A number of conspiracists even hypothesize that Malamar control a number of world leaders as well, in the same vein as Aegislash were purported to in medieval times. Some even go as far as to claim that Malamar are behind every current celebrity in the world.

Malamar have strong hypnotic powers akin to brainwashing, which many shady people exploit.

Malamar is the evolved form of Inkay. Its evolution method is very unique, as it evolves from Inkay at level 30 only when the 3DS is held upside down.

Starting from Pokémon Sword and Shield, the upside down trick can only be done by setting the switch into handheld mode.

Three Malamar appeared in the very first episode of the XY series, swimming along with some Water-type Pokémon.

A Malamar made its appearance as an evil, rogue Pokémon who used its hypnotic abilities to put Ash's friends, Pikachu, Team Rocket (bar Meowth), Officer Jenny, and several other Pokémon in a trance in A Conspiracy to Conquer!. This very same Malamar appeared again where it faced off against James' Inkay in Facing the Grand Design! and partnered up with two other evil Malamar.

Several other Malamar also made an appearance in Facing the Grand Design!. However, unlike the three evil Malamars, they appeared to be gentle and kind to both humans and Pokémon and would fight for freedom, peace, honor and justice. When the three evil Malamars kidnapped everyone except for Clemont, James and Meowth, they joined forces with them along with several Inkays on a rescue mission to stop the evil Malamars from fulfilling their dark plans and save their friends from mortal danger.

Malamar is based on an upside-down squid. Its lights and hypnosis abilities are similar to that of the cuttlefish which are known to rapidly change their color to hypnotize prey. Its lights may also be based on the bioluminescence found in several squid species, such as the firefly squid. It also resembles an owl, who are often associated with knowledge, pairing with the psychic type. 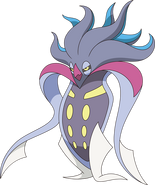 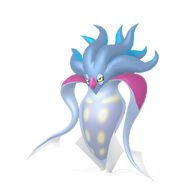 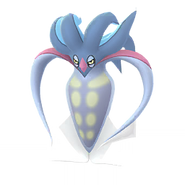