Though rare in the wild, Magnezone can be territorial; they prefer to use magnetism to repel foes rather than attack them outright. Their magnetic forces are strong enough to lift an adult human strapped into a metal harness. Strangely, Magneton can currently only evolve into Magnezone in natural magnetic fields; scientific attempts to trigger evolution through artificially generated ones have all failed. Because of their shape, many mistake floating Magnezone for UFOs. These creatures do seem to be receiving and transmitting unknown signals with their antennae, however; they also emit radar signals from these antennae to monitor their territory, honing in and blasting intruders with beams of energy.

Magnezone gains the abilities Magnet Pull, Sturdy, and Analytic, which are shared with its pre-evolved forms. Magnet Pull prevents any Steel-type Pokémon from switching out or escaping from battle. Sturdy allows Magnezone to survive any damaging attack if its HP is full, except for any attack that hits multiple times. Analytic allows Magnezone to gain a slight boost in its damaging moves if it is slower than the opposing Pokémon.

Magnezone's evolution is a result of Magneton being exposed to a unique magnetic field. It is able to produce electromagnetic energy from each of its three magnets.

Magnezone is based on robots and magnets just like its pre-evolutions Magnemite and Magneton. It appears to also be based around the concept of electromagnetism. It also shares similarities with UFOs

Magnezone comes from magnet and the term magnetic zone (also known as a "magnetic field").

Jibakoiru is a portmanteau of 磁場 (jiba, magnetic field) and coil. 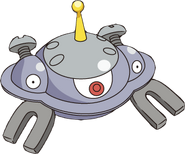 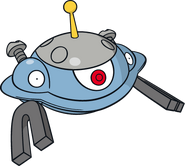 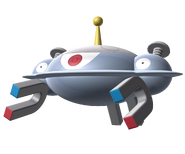 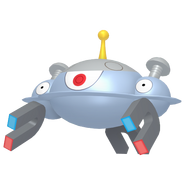 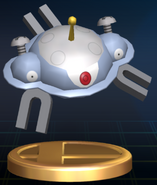 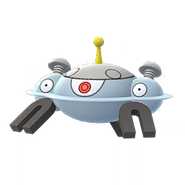