Magearna (マギアナ Magiana) is a steel/fairy-type Mythical Pokémon first revealed on February 15, 2016. It is an artificial Pokémon created by humans 500 years ago.

Magearna has a body made purely of steel, which was created by humans over 500 years ago. Magearna has a pair of long ears and a teal dot (resembling its nose), two pink eyes with yellow outlines, and a teal sphere connecting its head with its body. It has two short arms, a skirt-like sphere body, decorated with yellow lines and two short legs. It is said that its machinery has a secret of some sort.

Magearna is compassionate, and will try all its best to help anyone who is suffering from physical wounds and emotional turmoil.

Magearna can transform itself into the shape of a Poké Ball when it sleeps, feels sad, or defend itself. Additionally, it can feel other Pokémon's feelings, thoughts and body conditions. When a Pokémon is wounded, it can sense its pain.

Magearna starred in Volcanion and the Mechanical Marvel alongside Volcanion.

Magearna is based on an automaton. Its midsection resembles a Poké Ball, and its ability to roll into a ball may be based on the Morph Ball upgrade from the Metroid series, which allows Samus Aran (who typically wears mechanical armor) to roll up into a ball and enter tight passages.

Its name is made of the words "magic", "gear", "machina," and the suffix "-a" which refers to its feminine appearance. 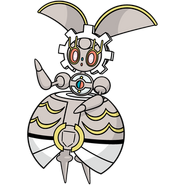 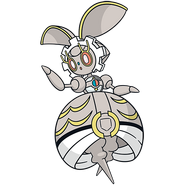 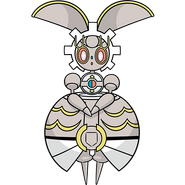 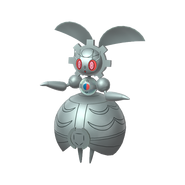 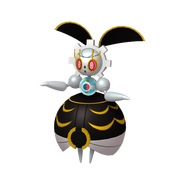 Magearna's first reveal, showing its participation in Volcanion and the Mechanical Marvel

Magearna in the Volcanion and the Mechanical Marvel second poster