Team Rocket's Meowth
Bruno
Madeline "Maddie" Blaustein (in Long Island, New York, USA, October 9, 1960 - December 11, 2008) was an intersex transgender American voice actress in Pokémon and she had many roles. She became the successor of Nathan Price for the voice of Meowth. She was succeeded by Jimmy Zoppi when 4Kids lost the license. Her other roles included Jillas in Slayers Try, Dr. K in Cubix and the Genie in Sonic Riders. She was assigned male at birth. She lived as her birth name Adam Blaustein for many years before transitioning to female. She was a coach to Kayzie Rogers in voice acting. On December 11, 2008, she died in her sleep due to a stomach virus. 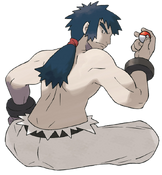 Captain from the Orange Islands 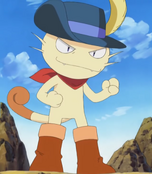