The Mach Bike is a speedy bike in Hoenn. It is much faster than the Running Shoes given to the player by his or her mother.

It is quick enough to ride over muddy slopes, and is needed to get over the broken tiles in the Sky Pillar. If the player falls down a hole or collides with someone or something, the bike needs to rebuild momentum. There is a race course on the Bike Path that only Mach Bike riders can use. A sign records the lowest number of collisions and fastest speed by a Mach Bike rider.

When the player talks to Rydel in his bike shop in Mauville City, Rydel generously gives the player the bike free of charge. The player can choose instead to receive the Acro Bike, a trick bike, or swap it out later. A biker on the Bike Path points out that it serves as free advertising, because the bike says RYDEL all over it. 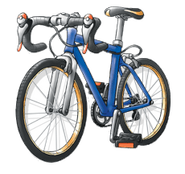 Mach Bike in Pokémon Ruby, Sapphire & Emerald
Add a photo to this gallery
Retrieved from "https://pokemon.fandom.com/wiki/Mach_Bike?oldid=913781"
Community content is available under CC-BY-SA unless otherwise noted.