The movie serves as a reboot of the movie series. It takes place in a different continuity than the main anime series and serves as a loose retelling of the first season of the anime. The Power of Us and Secrets of the Jungle take place in this same continuity.

When Ash Ketchum oversleeps on his 10th birthday, he ends up with a stubborn Pikachu instead of the first partner Pokémon he wanted! But after a rocky start, Ash and Pikachu become close friends and true partners—and when they catch a rare glimpse of the Legendary Pokémon Ho-Oh in flight, they make plans to seek it out together, guided by the Rainbow Wing it leaves behind.

Trainers Verity and Sorrel join Ash on his journey. Along the way, Ash catches an abandoned Charmander, raises a Pokémon from Caterpie to Butterfree and then releases it to follow its heart, and meets the mysterious Mythical Pokémon Marshadow. When they near their goal, the arrogant Cross—Charmander’s former Trainer—stands in their way! Can Ash and Pikachu defeat this powerful Trainer and reach Ho-Oh as they promised, or will their journey end here?[1]

The movie starts out with a Pidgeot flying through the sky. With the scenery then panning out to a stadium where a battle between two trainers is taking place.

A Gengar uses nightshade, with the opposing Blastoise withstanding it. Then Blastoise freezes Gengar with the use of Ice Beam. Who is then swapped out for a Venusaur, which uses Razor Leaf. Then, the two Pokémon counter moves of Hydro Pump and Solar Beam.

The scenery cuts out as it appears to be watched by Ash Ketchum on TV, who turns 10 the following day.

During the night, Ash dreams of which Pokémon to choose. But he accidentally throws his alarm clock against the wall.

The next morning, his mom, Delia tells him that he'll be late to Professor Oak's lab. Who then falls out of bed and hurries off to the lab.

He first decides to choose Squirtle, who was unfortunately chosen by another trainer who was on time, same for Bulbasaur and Charmander.

Ash falls asleep. He wakes up in his mind, where he finds himself in school. Ash looks out the window and sees what he thinks is Ho-Oh, but is instead a plane. Ash doesn't seem to remember Pikachu, but somehow remembers that he is his best friend. Ash follows Pikachu's outline, and the dream collapses and he wakes up to find a concerned Pikachu, along with Sorrel and Verity.

The three make a campfire in the woods. Sorrel explains what Pokémon mean to him. When he was a child, his parents were often busy working, so they had the family Luxray take care of him. One day, he went out into the snow to play and got wounded. Luxray found Sorrel, and gave it warmth for the night. When he woke up the next day, he found that Luxray had frozen to death, and mourned it as a rescue team found them. After that incident, he had difficulty bonding with a Pokémon until he met Lucario.

Pikachu senses something behind him and uses Thunderbolt, electrifying the trees. This prompts a group of wild Primeape to descend from the trees and toss the group in the air. Sorrel tells Ash that fighting back will only make them angrier, so Ash sends out Metapod, who uses String Shot on the Primeape. As the group makes their escape, the Primeape break free and resume their pursuit. Metapod evolves into Butterfree, who uses Sleep Powder, causing the Primeape to fall asleep. Team Rocket, who had been tailing the group, attempt to catch the Primeape herd, but fail as they waken and toss them into the sky.

Making their way to the mountains, the group notices that the Pokémon here are uneasy. A man comes out and tells them that they are eagerly waiting for Ho-Oh's power, and explains the legend to them. The man tells the group to call him Bonji, and during the trek, tells Ash about the shadow guide Marshadow, who had been trailing them their whole journey. Team Rocket, who continues to follow the group, are excited about Ho-Oh, but aren't happy that they're on an empty stomach.

As they reach the summit where the Rainbow Rock is, Bonji tells Ash to place the Rainbow Wing on the top of the rock. Before Ash can do so, Incineroar appears, using Throat Chop, which Ash narrowly avoids. Cross and his Lycanroc appear, demanding the Rainbow Wing. Ash refuses, and the two have a battle; Cross uses Incineroar, while Ash uses Charmeleon. Marshadow also manifests itself, though Benji states that it is only watching the fight. The two Pokémon battle, with Charmeleon using Slash while Incineroar uses a larger range of abilities. Midway during the battle, Charmeleon evolves into Charizard, surprising everyone, including Cross. Cross quickly snaps out and states that a newly evolved Pokémon is still weak, but is shocked when Incineroar is defeated by Charizard. He lies helpless as Ash passes him to place the Rainbow Wing on the top of the rock, before he suddenly lashes out, as he is angry and confused as to why Ash should battle Ho-Oh. Cross grabs the Rainbow Wing and places it on the top of the rock, which quickly corrupts the surrounding area. Benji states that the Wing becomes corrupted when it is placed by someone with a heart of evil.

Marshadow becomes enraged and uses the Wing to empower itself, before brainwashing Lycanroc and the wild Pokémon into attacking the group. Benji states that only Ash can retake the feather, so the rest of the group help Ash out in reclaiming it. Cross is attacked by the brainwashed Pokémon, before Charizard saves him. While Charizard did not like Cross, it still acknowledged him as his former trainer. Cross is surprised and realized why Ash was worthy of fighting Ho-Oh. Ash makes his way to Marshadow, with the brainwashed Pokémon's attacks being blocked by his group. With Lycanroc being the only Pokémon left in his way, Cross tackles it and tells Ash that he needs to do this. Lycanroc bites Cross' arm; Cross endures it, and reminds Lycanroc of the past, which it remembers, causing it to break free of Marshadow's control before licking Cross' face in affection.

Ash battles Marshadow with Pikachu. After a prolonged fight, both Pokémon are exhausted and out of energy; however, the brainwashed Pokémon aren't. Ash tells Pikachu to get in his Poké Ball, though he refuses as he wants to be with Ash. Ash forces Pikachu into the Poké Ball just as the brainwashed Pokémon unleash a barrage of attacks on Ash. Pikachu later comes out and sees that Ash is disappearing, becoming saddened and cries when Ash supposedly dies. Ash, who finds himself in an alternate dimension, notices Pikachu crying and tries to reassure him. Pikachu sesnes Ash's presence, albeit confused. Ash runs like he always did with Pikachu in the past, and his essence begins to grow larger. When it is large enough, Pikachu jumps into the rift and the two reunite, before they are materialized back into the real world, reassuring the whole group. Marshadow notices that the Wing is gone, and it reappears in Ash's hand, cleansed of corruption. This also frees the brainwashed Pokémon from its control. Ash places the Wing on the top of the rock, prompting Ho-Oh to appear.

Team Rocket, who are now climbing a rock face, notices the rainbow. They then see Ho-Oh; Meowth, who is excited by the Pokémon's appearance, loses his grip, prompting the whole team to fall off the rock face. Ho-Oh revitalizes both the group and the wild Pokémon. Ash requests a battle with Ho-Oh, who accepts his offer. They battle until sunset. The group returns to the Poké Center. Nurse Joy is surprised and asks Ash who he and Pikachu battled; Ash replies Ho-Oh, surprising her. Outside, Cross says farewell to the group, telling Ash that they'll eventually battle again, and tells him that he'd better not lose before they do so.

The next day, Ash, Verity and Sorrel say farewell to each other. Sorrel states that he wants to learn about the legends of the Kanto Legendary Birds Articuno, Moltres and Zapdos. Verity wants to see her mother again, stating that she hasn't visited her in a long time. Ash states that he will continue his journey to be a Pokémon master. The three state that they'll have a battle when they meet each other again at the same time, prompting everyone to laugh, before they split paths.

Back at the mountain, Benji proclaims that there will be another Rainbow Hero within the younger generation, and tells them to continue on so that they can battle Ho-Oh. Marshadow simply observes Bonji behind a rock.

The logo of the movie

Japanese version of the poster

All of Ash’s friends 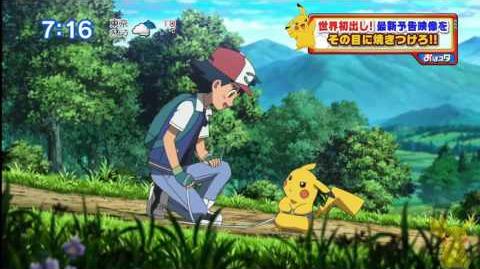 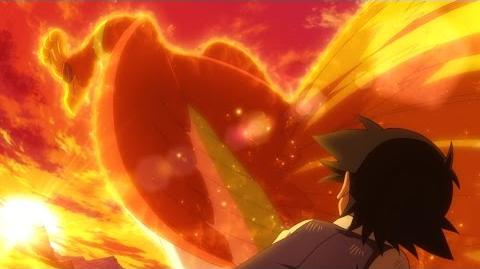