Pokémon The Movie - Volcanion and the Mechanical Marvel

Film in other countries

A Pokémon came falling from the sky!

As Ash continues his journey aiming to become a Pokémon Master, a lump covered in white smoke suddenly dropped out of the sky and landed in front of him and his friends. As white smoke spread around as far as the eye could see, a shape appeared from within it; The mythical Pokémon Volcanion.

Ignoring the worried Ash and his friends, Volcanion immediately tries to leave the place.  However, the impact of the fall caused Ash and Volcanion to be linked with a strange device and unable to separate...!

Volcanion runs off and Ash gets dragged along by it, eventually reaching the Azoth Kingdom, a city of super-machinery where gigantic cogwheels are all over the place and rotating. Why did Volcanion fall from the sky? And why did it head to the Azoth Kingdom!? With the mechanical kingdom of machinery as its setting, the hottest legend in Pokémon history begins! 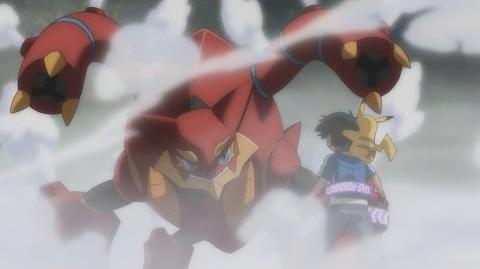 Pokémon the Movie Volcanion and the Mechanical Marvel Trailer
Add a photo to this gallery
Retrieved from "https://pokemon.fandom.com/wiki/MS019:_Pokémon_The_Movie_-_Volcanion_and_the_Mechanical_Marvel?oldid=1406753"
Community content is available under CC-BY-SA unless otherwise noted.