MS018: Pokémon The Movie - Hoopa and the Clash of Ages

Pokémon The Movie - Hoopa and the Clash of Ages

Film in other countries

Hoopa and the Clash of Ages (の フーパ The Archdjinni of Rings: Hoopa) is the second XY series movie. It features Primal Groudon, Kyogre, a Shiny Mega Rayquaza, and Hoopa.[1]

Public decision on the long-awaited second edition is July 18, 2015 (Saturday)!

Aiming to become a Pokémon Master, Ash continues his journey together with his friends. Right now, they've been visiting a Pokémon Center in a desert.

As they're taking a break and eating some donuts, a mysterious ring suddenly appears behind them. Then, a hand extends from inside the ring, attempting to take a donut! "Wait!" Ash and Pikachu both grab hold of the hand, which then pulls them both into the ring. The ring then disappears, leaving a dumbfounded Clemont, Serena and Bonnie behind...

"Appear!" Ash and Pikachu fly out of the ring! The scenery has suddenly changed, confusing Ash. "Hihihi! Are you surprised?" "Who are you?" "I'm Hoopa!" Huge towers can be seen in the distance. Incredibly, as Ash and Pikachu passed through the ring, they were instantly teleported to Dahara City, the destination of their current journey.

This is the first time they encounter the mysterious Pokémon Hoopa. What is this Pokémons true intentions? What kind of powers do its rings conceal? This is the beginning of Ash, Pikachu and Hoopa's adventure!

Ash, Pikachu and their friends decided to go to Dahara City as it is the next location of Ash's journey. Then, after a break, they are instantly brought to Dahara City by a strange ring portal. They found out that the one who used the ring was the mystical Pokémon Hoopa. After that, they also meet Mirai, a caretaker of Hoopa. She tells them that her brother Baraz might be coming so he would meet them, but in that time, Baraz has come with a strange look. He then opens a strange bottle called the Prison Bottle and Hoopa is engulfed by a cloud of purple smoke. Hoopa turns into its super powerful form, Hoopa Unbound. Hoopa suddenly starts to become evil as it then tries to attack the group but it is unsuccessful. Mirai manages to return Hoopa back to normal. Ash and his friends find out that Hoopa Unbound was the culprit of almost destroying Arche Valley. However, Unbound tries to take over Hoopa again but manages to keep it at bay.

Then, out of the sudden, the Prison Bottle breaks due to the overwhelming power. Hoopa Unbound is released from its prison as now it begins to summon Dialga, Palkia, Kyurem, Primal Groudon, Primal Kyogre and Giratina in order to destroy the city, but Hoopa calls in Lugia, Latios, Latias and Rayquaza in order to help Ash, Pikachu and Hoopa. Can they stop Unbound and its legendary minions from destroying the city and will Hoopa ever be able to restore the bottle and master its full powers?

A new poster with Hoopa revealed

Artwork of the 18th Pokémon movie

Poster for the 18th Pokémon movie.

Logo for the 18th Pokémon Movie. 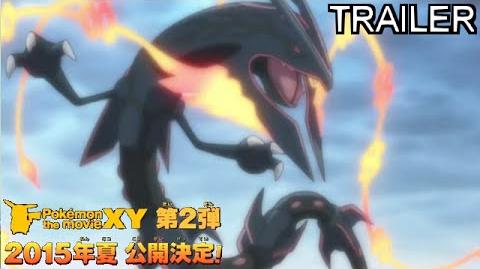 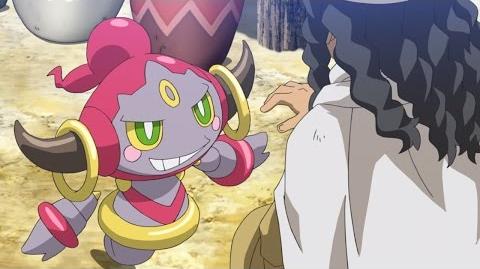