It was released in movie theaters in Japan on July 18, 1998. The English version, produced by 4Kids Entertainment and distributed by Warner Bros. (on behalf of Kids' WB) in association with Nintendo Co. Ltd., was later released in the United States on November 12, 1999. And it has received negative reviews from film critics, but was a commercial success, and was more liked with fans despite the negative reception from critics.

Pokémon: The First Movie has two parts: the feature presentation and a 20-minute short. In the United States, this film was rated G by the MPAA.

A 64-page art book has also been released. A remake of this movie was announced to be released on July 12, 2019.

Dr. Fuji, a research scientist of Team Rocket, briefly describes in a prologue how his researchers uncovered a fossil of the remnants of Mew, one of the rarest Pokémon in existence, believed to be extinct (although this is not the case). Using the DNA of Mew and a research laboratory, they created Mewtwo. Mewtwo, is a Psychic Pokémon that instantly distrusts humans upon learning they intend on experimenting upon him, and using his amazing powers, he levels the base, killing Dr. Fuji and the other scientists. Head of Team Rocket, Giovanni, approaches Mewtwo and offers him an alliance, Giovanni promising to help Mewtwo control his powers. Mewtwo is "trained" over a course of several months but he soon is told by Giovanni that Mewtwo is merely his tool. In a fit of rage of being betrayed, Mewtwo destroys Giovanni's headquarters (how Giovanni survived is unknown...) and flies back to the remains of the laboratory island. He decides to find his own purpose and destroy all those who oppose him. He deems the relationship of humans and Pokémon living together horrific and declares that his reign will soon begin.

Elsewhere, Ash Ketchum and his companions Misty, Brock, and their Pokémon are resting. After Ash defeats a Pokémon Trainer who has a Donphan (a new Pokémon around the time the film was released), a Dragonite delivers a holographic message to the trio. A woman addresses them, inviting them to attend a party hosted by the world's best Pokémon Master at his palace on New Island. Excited, Ash wastes no time in heading to a seaport where he and his friends can catch a boat to New Island. Coincidentally, a deadly storm by Mewtwo has formed and the boat to the island has been postponed. Officer Jenny and Miranda addresses the other trainers who seem to have all been invited to the island. The other woman warns everyone that she fears it's a storm just like one long ago that took many lives. She tells a tale about the remaining Pokémon weeping in sorrow for all those lost in the storm. The water of their tears revived the people lost in the storm. Several brave trainers head out to the island, while Ash and his friends are left on the dock. A pair of Vikings appear and offer the trio a lift in their small boat. However, a wave hits the boat, revealing the Vikings to be Team Rocket in disguise. Another wave destroys the boat, then the trio using their aquatic Pokémon to reach the island. Team Rocket also survive the storm. The woman from the invitation leads the trio up to a large room where others trainers wait - Corey, Fergus and Neesha. A beam of light appears from a spiral staircase and the ultimate Pokémon Master appears: Mewtwo. Mewtwo asked several trainers and their Pokémon that was the test, and reveals his maid is Nurse Joy, who went missing previously. Ash challenges Mewtwo to a battle, which Mewtwo accepts. Team Rocket come across a secret lab and find a video of Dr. Fuji, who explains how he created Mewtwo. In a large machine which can clone Pokémon, are clones of Charizard, Blastoise, and Venusaur, who are summoned by Mewtwo upstairs. Around this time, Meowth is also cloned.

Ash, Corey, and Neesha battle Mewtwo's clones with their own Charizard, Blastoise, and Venusaur, but all three are defeated. Mewtwo claims his prize: all of the trainers' Pokémon so he can create a clone army which will replace humanity and real Pokémon when they are destroyed by Mewtwo's storm. Mewtwo conjures hundreds of his strange Poké Balls (Clone Balls) and sends them at the trainers. Mewtwo watches with a smirk as the trainers try frantically to get their Pokémon away, but with no success. Surprisingly, the other trainers' high level Pokémon are captured with ease, while Ash's low-level Pokémon manage to avoid capture longer. Ash tries returning Bulbasaur and Squirtle (who have been fighting the balls bravely), but it's no use. Two of Mewtwo's Poké Balls fly over and capture Bulbasaur and Squirtle's Poké Balls. Brock, Misty (after tucking Togepi safely in her bag), and Nurse Joy try running away with Psyduck right behind them but it is captured, infuriating Misty. Another Poké Ball then captures Vulpix right out of Brock's arms, to his horror. The balls manage to capture all the trainers' Pokémon except Pikachu. This leads to chase with Pikachu using Thundershock to repel the Poké Balls. However, Pikachu becomes exhausted from doing this and while on a spiral staircase, is knocked off a high point, and in mid-air, he is captured. Ash pursues the Poké Balls down into the cloning room. Ash manages to save Pikachu but this causes the cloning machine to explode and release both the clones and real Pokémon. Ash leads the real ones upstairs to the battle arena to stop Mewtwo and its clones.

Ash attempts to fight Mewtwo by punching it, but is blasted away by Mewtwo's powers. A Mew suddenly appears and saves him with a special Psychic Bubble. Mewtwo attacks but Mew repels the attack. The real Mew and the Mew clone meet. Mewtwo says he will prove that he is stronger than the real thing, while Mew, sidetracked, looks around curiously. Mew and Mewtwo take command of their armies and begin a widespread battle with real Pokémon fighting their exact clones. However, the battle begins to spiral out of control, and soon, both real Pokémon and clones are so exhausted and wounded they all come to the point of death, and they can no longer fight, but fall on each other and pathetically attempt to breathe and attack each other.

Team Rocket arrives and, when seeing this sight, Jessie and James have a change of heart. Now seeing how wrong fighting really is, they swear never to fight again and break down crying in each other's arms.

Pikachu is one of the only two who don't fight, trying to persuade his clone, Pikachutwo, to not fight. Still, Pikachutwo doesn't listen, and attempts to kill Pikachu, only to exhaust himself. Meowth, however, comes to terms with his clone, Meowthtwo, and the two see that if they can set aside their differences, maybe the world can be a better place.

Horrified of the battle and Pikachu's beating by his clone, Ash leaps in the middle of an attack fired by Mew and Mewtwo and tells them to stop, but he is hit full-force by both attacks, sacrificing himself. After falling to the ground, the magnitude of the Psychic powers turn his body into stone. Everyone goes silent in complete shock...

After a moment of complete stillness, Pikachu runs over to his master and tries to wake him up by nudging him. When Ash's body doesn't move, Pikachu then tries to revive the fallen Ash with multiple electric shocks, but fails.

Pikachu stops for a second to take a breather. He has run out of electric energy and now he realizes Ash is gone. For good. Seeing this sight, Pikachu begins to cry. The Pokémon, all having to see this sad sight, cry too (Mewtwo is the only one who doesn't cry, for his heart is still hardened). The water of their tears begin to glow and gather around Ash's body, resembling Miranda's words. More and more tears gather in Ash's frozen body and begins to glow, with the last two tears being Pikachu's, and a pillar of heavenly light descends on Mewtwo's arena and bathes Ash and the stadium with light and... Ash is miraculously...

Ash wakes up and the first thing he sees is Pikachu, who jumps into Ash's arms. Upon seeing Ash's sacrifice and revival, Mewtwo has a change of heart and realizes that it does not matter how he was born, it is what he does that defines who he is. Using his powers, he flies and leaves the island with Mew and the clones, but he erases the memories of Ash and all those present on the island, so they do not remember the event because Mewtwo saying Ash that he passed the test.

Ash and his friends find themselves back on the dock with no idea how they got there. Nurse Joy, who had been Mewtwo's Captive, now returns to her duties with her offer to look at the trainers Pokémon. Ash and his friends go outside as the storm clears up. Looking up into the sky, Ash spots Mew in the clouds and reveals to Misty and Brock how he saw a rare Pokémon on the first day of his journey, and that he may have just seen another one. Misty says maybe he might be just seeing things. Brock says he might not be, so Ash says that maybe, they'll see.

And what happened to Team Rocket? Well, they're on New Island. Jessie wonders how they got there. James says it doesn't really matter, and Meowth declares it the first happy ending for them. They end the film by "signing off again" and deciding to take a vacation on New Island.

However, though Mewtwo erased everyone's memories of him at New Island, he is still being targeted by Giovanni, who has been making another plan to capture and bend Mewtwo to his will.

Characters that appear only in the radio drama 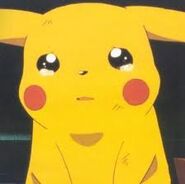 Mewtwo using his powers for the first time

Depiction of Mewtwo's birth; scan from Pikachu the Movie Box 1998-2002
Community content is available under CC-BY-SA unless otherwise noted.
Advertisement