VI, VII
Lysandre is a villain who appears in X and Y and was the leader of Team Flare. He is also the descendant of AZ's younger brother and an old friend of Professor Sycamore.

Lysandre is a pale man, with muscular build, blue eyes and pointed red hair connected to his beard. Lysandre wears a black suit, lined in red with a fluffy gray collar and black dress shoes. He also wears a pair of black fingerless gloves, as well as having a Mega Ring on his left middle finger.

At the final phase of his plan, Lysandre wears a special gear, composed of orange striped glasses, a foldable brown bracer on his right hand and a large backpack-like contraption on his hand, which emits contraptions (designed like flying insects) attached by a wire, which can harvest a Pokémon's energy.

Lysandre at first seems to be a kindhearted man who sees the beauty in everything, but in truth, he is so obsessed with keeping beauty in the world that he is willing to exterminate all Pokémon to prevent them from being used to harm or steal from anybody. He abhors change, believing that it can only bring scarcity and ruin to the world, so he aims to exterminate every human and Pokémon beings that isn't a member of Team Flare in order to protect the world from selfish humans and keep the planet's limited resources from running out. He does acknowledge and realize that this is not the just path: At one point he cries at the thought of killing all of the Pokémon in the world that are not loyal to Team Flare, thinking they are beautiful creatures that deserve to live. Despite this, he willingly goes through with the plan regardless as he sees no alternative, believing the world and humanity will benefit in the long run.

In his youth, Lysandre used to travel around the world with his Pokémon to aid the needy. However, much to his disappointment, the ungrateful people wanted more. Completely devastated, Lysandre had the thought of wiping the world ignited.

Lysandre first came across the player character in the Lumiose City's lab and commented how gifted the player is. In Café Soleil, he was then seen chatting with Diantha about Diantha's acting career. He suggested the concept of eternal beauty, which was objected by Diantha. He then told his ideology to the player character.

The player character would get a Holo Caster Message from Lysandre after receiving the Psychic Badge from Olympia. This time, he would assert his determination on wiping Kalos clean. After defeating him at Lysandre Labs, he would let the player character battle against Xerosic who would then activate the weapon.

At the Team Flare Secret HQ beneath Geosenge Town, the player and Calem/Serena would see Lysandre facing the ultimate weapon. He would then challenge the player to another battle. At the deepest part of the HQ, the player character would have to battle Lysandre for the last time after capturing Xerneas or Yveltal. In the end, Lysandre vanished among the light of the weapon. 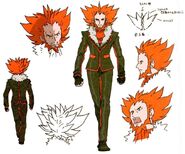 Add a photo to this gallery
Retrieved from "https://pokemon.fandom.com/wiki/Lysandre?oldid=1419118"
Community content is available under CC-BY-SA unless otherwise noted.