Lycanroc (ルガルガン, Rugarugan) is a rock-type Pokémon introduced in Generation VII. It is the evolved form of Rockruff.

In its Midnight Form, Lycanroc is a slouched bipedal wolf, with dark red fur and a thick mane that runs from its back to the top of its head. It has a short, stubby tail, folded ears and eyes that glow bright red with no visible iris or sclera. A fringe of black fur hangs over its face, and two pointed rocks emerge from either side of its waist, which is similar to the extinct thylacine's stripes.

As Rockruff nears evolution, it becomes more aggressive and prone to howling loudly. It then runs away and disappears, only returning to its trainer once it has evolved.

The midday form of Lycanroc tend to live in mountains. They are solitary hunters and avoid making packs as to prevent disputes. However, they are fiercely loyal to a trainer that had accepted them during their rambunctious time as a Rockruff.

The midnight form of Lycanroc prefers to let its enemy get the first hit before delivering a devastating counterattack. They are predisposed to violence and easy to get excited by a worthy opponent, signified with their glowing eyes. They will not accept trainers that they feel are poor battlers or give questionable orders.

The dusk form of Lycanroc are usually cool, calm and collected, and very loyal to the trainers they deeply trusted, as well as containing a powerful fighting spirit. When a battle gets heated, they choose to attack directly or use counterattacks that inflict double damages on their opponents. Overall, the dusk form of Lycanroc has a mixed personality, with traits from both the Midday and Midnight forms.

Lycanroc is the evolved form of Rockruff, at level 25. Rockruff evolves into a different form of Lycanroc depending on the time of day. If it evolves in the daytime, it will become the Midday Form; whereas if it evolves in the nighttime, it will become the Midnight Form. In the Evening Twilight time, only Rockruff who has the event-exclusive ability Own Tempo will evolve into the Dusk Form during 17:00 to 17:59.

Ash's Rockruff evolves into a Dusk Form Lycanroc in Rising from the Ruins!, where it was with a Midday and Midnight forms of Lycanroc.

All of the forms of Lycanroc appear to be based on the extinct Japanese wolf which was associated with rocks and mountains. Wolves are also sometimes referred to as "yamainu" in Japan, which translates to "mountain dog".

Its Midday form is based on regular wolves, especially the Japanese wolf. Its duality with its Midnight form may be based on the "voluntary" werewolf (a version that changes from man to wolf at will and keeps control of its mind).

Its Midnight form is based on werewolves. Its appearance of red eyes, bared teeth and folded ears resembling a stereotypical "mad dog". Its duality with its Midday form may be based on the "involuntary" werewolf (a version that turns into a monstrous man-wolf hybrid on a full moon and becomes a vicious rampaging beast).

Its Dusk form appears similar to wolves and dingos while also sharing traits of its Midday and Midnight counterparts.

Lycanroc comes from lycanthrope (another name for a werewolf) and rock. 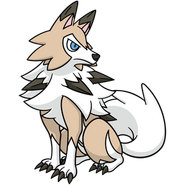 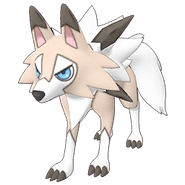 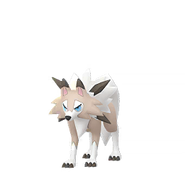 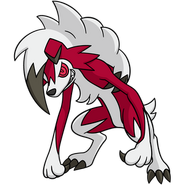 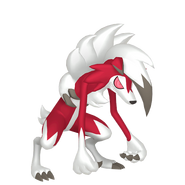 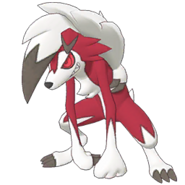 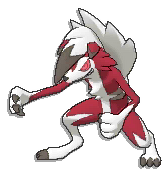 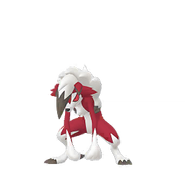 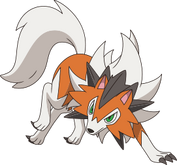 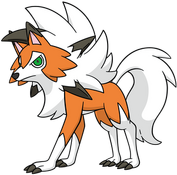