Lusamine is a character appearing in Sun and Moon and Ultra Sun and Ultra Moon. She is the president of the Aether Foundation, and the main antagonist of the games.

Lusamine has blonde hair with silver streaks and green eyes. She wears a white dress with a diamond badge on it, black and white leggings, and boots of the same color, with green soles. Her boots have a medium-height yellow heel to them.

When Lusamine fuses with a Nihilego, she transforms into a dark-colored version of the Ultra Beast with her upper torso in the bell, her legs hanging out of the body and several eyes on her tentacles with gem-shaped pupils.

Lusamine was originally shown to be a kindhearted lady who is willing to "create a utopia for Pokémon". In truth, however, she seeks for beautiful things she could "own". Though her daughter and son both try to warn her about the dangers, Lusamine does not forgive them for betraying her, showing utter coldness, as she does not want anything to stand in her way to obtain the power from the Ultra Beasts. Ultimately, she wishes to live in a world that consists only of her and Nihilego, which she views as a surrogate family that is completely obedient to her. She is also extremely manipulative, taking advantage of Guzma's inferiority complex to befriend him and convince him to serve as a hidden mercenary for the Aether Foundation.

Despite this, it is implied that Lusamine was a genuinely kind person at one time, but after her husband Mohn was lost in the Ultra Beast's world, the grief drove her insane. After her defeat and forceful separation from her Nihilego, she seems to regain some of her sanity and comments that she finds Lillie "beautiful," before collapsing into a coma.

Lusamine welcomes the player character and others into the Aether Foundation. When Hau tells her that he thinks she's not older than them, she calls him as a sweet boy and admits that she's over 40, which shocks Hau.

However, once her plans are exposed, she prepares to open a wormhole to the other world, where the Ultra Beasts originate from. Lusamine shows utter coldness towards Lillie for taking Cosmog away and escaping, and reflects on the time Lillie was younger and obeyed her every command. Lillie yells for her mother to stop, as Cosmog could potentially die. Lusamine just laughs and tells Lillie that she used to be very pretty, but is very ugly now. Lusamine orders Guzma to attack them. She succeeds in opening the wormhole and vanishes.

Once the player character and Lillie access the Ultra Space, Lusamine still refuses to back down, claiming she has the right of taking control of Ultra Beasts and ignore Lillie. Lillie gathers her strength and opposes Lusamine, who fuses herself with a Nihilego, which causes her normal Pokémon to develop Totem traits (likely due to the Nihilego venom). However, the player character defeats her, while Lillie calls on the power of Alola's Legendary Pokémon, causing Lusamine to become hurt and split from the Ultra Beast.

In the end, Lusamine was taken away to recuperate, while her daughter seeks ways to heal her. Later, she leaves for Kanto to seek ailment from Bill, who has already fused and defused with a Pokémon before. 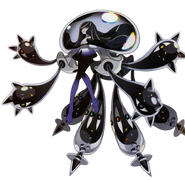 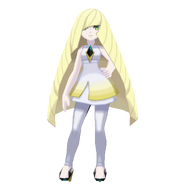 Add a photo to this gallery
Retrieved from "https://pokemon.fandom.com/wiki/Lusamine?oldid=1031868"
Community content is available under CC-BY-SA unless otherwise noted.