Lunala (ルナアーラ, Runaa'ara) is a Psychic/Ghost-type Legendary Pokémon introduced in Generation VII. It is the mascot for Pokémon Moon. It is Solgaleo's counterpart and one of the two evolved forms of Cosmoem. It is a member of the Light Trio alongside Solgaleo and Necrozma.

Lunala is a large Pokémon resembling a skeletal, legless bat. It has a short snout, dark pink eyes with white centers, and a deep blue area on its upper head that shows a constantly changing starscape.

A rigid raised hood wraps around its head in a crescent shape, resembling a crescent moon or bat ears, and drapes around its neck as well. The outside of the hood is yellow, while the inner part that curves around Lunala's head is a pattern of deep blue and white streaks. Its torso resembles a ribcage with a slightly curved spike on each shoulder and three spikes extending from the bottom toward its tail.

Its massive wings resemble a bat's wings with the skeleton exposed, except that Lunala's wings have a total of seven "finger bones": four running through each wing, one running along the edge to the outermost tip, and two pointing upwards that may act as claws that are more functional. The four "bones" through Lunala's wings are only visible in segments.

The skin of Lunala's wings is an iridescent deep blue, and a light blue light source appears to glow from behind its ribcage. A large, pale yellow crescent connects the outermost tip of each wing to the next two inner tips, and the remaining two innermost tips are adorned by yellow, four-pointed stars.

The bottom of Lunala's tail is also lined by a yellow crescent, with a ridge running up the middle of the tail towards the ribcage.

When Lunala enters its Full Moon phase, its third eye—a light red symbol of an eye—appears on its forehead and the starscape turns to streaks of light. The skin of its wings glows a bright, light blue.

It spreads its wings wide so that the yellow parts on each wing are arranged in a circle with the outermost point of the four-pointed stars disappearing in the transformation.

Known as the "beast that calls the moon," Lunala has long been honored as an emissary of the moon (月の騎士 tsuki no kishi, lit. "knight of the moon"). This Pokémon constantly absorbs light to convert into energy. When it spreads its wings to absorb light and glitters, it resembles a beautiful night sky. Lunala can create Ultra Wormholes to travel to and from Ultra Space. Lunala and its counterpart, Solgaleo, can create Cosmog. It can also influence a Rockruff's evolution into Lycanroc's Midnight form with lunar energy.

Lunala is the evolution of Cosmoem exclusive to Pokémon Moon, Pokémon Ultra Moon and Pokémon Shield (The Crown Tundra) starting at Level 53.

Lunala is based off a bat with a crescent moon motif, as well as a symbolism of bats with their cultural association to the night. It might also be based on Camazotz, a bat-like god of the Moon. Its Ghost-type and bat-like appearance may also be based on the ghost bat. Its Shiny coloration is based on the blood-red hue of a lunar eclipse.

Lunala comes from lunar (Latin for "Moon") and ala (Latin for "wing"). It could also come from luna (Moon) and lunula (something crescent shaped). 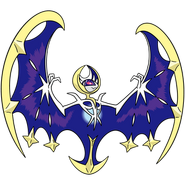 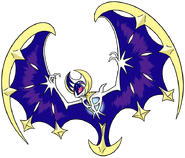 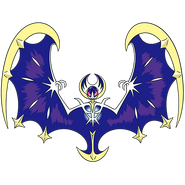 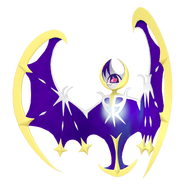 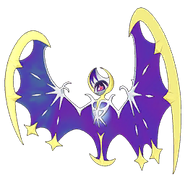 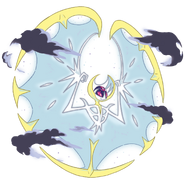 Lunala in its Full Moon Form 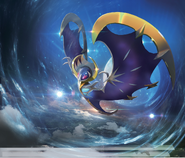 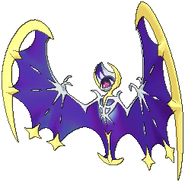 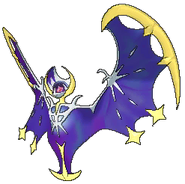