The City of Light.
の

Voltage Badge
Lumiose City is the main city in the Kalos region. It contains the fifth Gym the player character challenges, which specializes in Electric-type Gym and is led by Clemont.

At a population of 416, Lumiose City is the largest and most populated city in the Pokémon world.

Also known as the City of Light, Lumiose City has a unique structural design. It is a big, circular city that is divided into multiple sections:

During the first visit to the city, there is a shortage caused by Team Flare's actions in Kalos Power Plant. As a result, the player may only access the South Boulevard and Vernal Avenue until Team Flare has been defeated in the Power Plant.

Lumiose City is also where the post-game storyline, the Looker chapters, takes place. 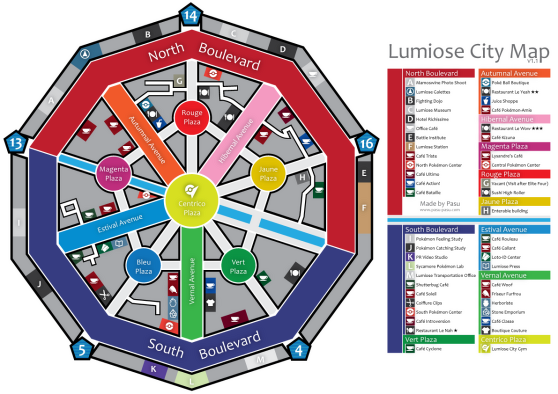 Located near the east end of South Boulevard, Restaurant Le Nah is the first restaurant the player has access to.

Located opposite of the entrance to Vernal Avenue, the Pokémon Lab is where the player meets Professor Sycamore for the first time and receive their Kanto Starter Pokémon.

This Pokémon Center is located just next to the entrance to Vernal Avenue. There is a Butler on the right side of the Pokémon Center, who the player can also buy items from using Poké Miles.

Located west of the Sycamore Pokémon Lab, this is where the player can make Trainer PR Videos.

Located across from the Route 5 gate, the player can change their hairstyle here.

Located west of Coiffure Clips. After becoming the Champion, Diantha offers to trade any Pokémon for her Ralts here.

The Shutterbug Café is located next to the entrance to Estival Avenue.

This unnamed office building is located across from the Shutterbug Café.

The Galette Stand is located opposite of the Autumnal Avenue entrance, functioning similar to the Casteliacone stand in Castelia City. This shop sells Lumiose Galettes for four hours starting from 3 AM, 9 AM, 3 PM and 9 PM. If the player buys the Lumiose Galette within an hour after they are baked, they will also receive a Moomoo Milk.

This unnamed office building is located west of the Route 14 gate.

If the player goes to the second floor of the office building, a supposed "ghost figure" of a Hex Maniac, commonly dubbed the "ghost girl", would come out of the elevator, walk by the player character and say "No, you're not the one", before disappearing. This Hex Maniac cannot be encountered again.

Located east of the Route 14 gate, the Lumiose Museum stores many paintings, some about the previous regions of the Pokémon World. The player may pay for

200 for an audio guide, which becomes free if the player has at least 90 style points.

This Pokémon Center is located across from Lumiose Museum.

Located across from the entrance to Hibernal Avenue, Hotel Richissime is a luxury hotel that the player can work for.

This unnamed office building is located east of Hotel Richissime.

Located south of the Route 16 gate, the Battle Institute is a battle facility that works just like that in Nimbasa City.

The Lumiose Station is located just south of Battle Institute. It allows the player to access to Kiloude City, provided they have a TMV Pass.

From south to north:

A man in the northwest corner also sells Mega Stones of the Kanto Starter Pokémon not chosen by the player. They start in the price of

1,000,000, but drops in price depending on how stylish the player is, eventually dropping to

Only accessible if the player has at least 25 style points, this boutique sells expensive clothing.

Unlike other Boutiques across the Kalos region, this Boutique has two floors: the first floor is for female clothing, while the second floor is for male. The player cannot buy clothing of the opposite gender.

Here, the player can buy a Furfrou trim for

500, which lasts for five days or if the Furfrou is deposited into the PC. As the player gains more style points, more trim style becomes available.

This café is a gathering place for Furfrou admirers, who call themselves "Furfroumers".

From west to east:

The player can try a lottery drawing in the Loto-ID Center once a day. A reward is given every day based on how many digits the ID number of all Pokémon owned by the player matches the daily winning ID number.

Alexa, Viola's sister, works here. She recommends different places around the city that the player can visit, and offers to take them there.

Additionally, the player can read a top-secret memo if they have a Volcanion in the party:

The secret of the power

This Pokémon Center is located southeast of the main area.

Located at the junction between Magenta Plaza and Autumnal Avenue, Lysandre Café is a maroon-colored Café that is also the secret entrance to Lysandre Labs, one of Team Flare's hideouts. Additionally, it also plays a major role in the post-game Looker chapters.

From northwest to southeast:

A shop that specializes in selling Poké Balls. The player can buy different types of Poké Ball here.

The Juice Shoppe is a shop that specializes in Berry juices. The player can buy pre-made juices by talking to the left counter, or make a fresh juice using two Berries from the bag by talking to the right counter.

The Looker Bureau, known as the Vacant Storefront before being occupied, is the main setting of the post-game Looker chapters.

Located opposite of the Looker Bureau, Sushi High Roller is the last restaurant the player can visit. It requires the player being the Champion and having 90 style points to access, and the meals are also the most expensive among all restaurants as well.

From northeast to southwest:

Restaurant Le Wow is the third restaurant the player can visit, requiring the player to become the Champion.

Located east of the main area, it is the house where Trevor lives.

The Prism Tower serves as the middle of the city. It is also the official Gym of Lumiose City, whose Gym Leader is Clemont and specializes in Electric-type Pokémon.

The player may ride the Lumi Cab for immediate, but expensive transportation. The fee increases with how far the distance is, and if the player does not have enough money to pay, the driver will battle the player.

200, which brings them to either the east or west end of the boulevard.

After the player has defeated the Pokémon League and become the Champion, a parade is hosted at Lumiose City by Professor Sycamore. Duirng the parade, AZ battles the player, and is reunited with his Floette after the battle.

There is a style system in Lumiose City. As the player becomes more stylish, different features are unlocked.

The player can do activities to increase their style.

If the player is stylish enough, different features are given across the city. In addition to NPC's appearance and dialogues, there are useful features that give benefits to the player.

Lumiose City appears as a stage for Super Smash Bros. for Nintendo 3DS / Wii U for the Nintendo 3DS version. Sakurai mentions in Miiverse that the fighters will be fighting on Prism Tower.

The Lumiose City stage returns in Super Smash Bros. Ultimate as one of the seven returning Pokémon Stages in the base game.

Lumiose City is the hometown of Clemont and Bonnie, along with their father, Meyer, and Clemont's Clembot. The Conference of the Pokémon League for the Kalos region takes place here.

Lumiose City also offers an international airport that has flights serving Kanto, Hoenn, and other regions within the Pokémon world. A battlefield is available on the airport's observation deck for Trainers wishing to battle while waiting for their flight.

Calem on a Lumiose City street.

Serena on a bridge over a body of water, overlooking Lumiose City's symbol

Serena looking around the cafés of Lumiose City
Community content is available under CC-BY-SA unless otherwise noted.
Advertisement