His female counterpart is Dawn.

Lucas is a short boy, who has dark blue eyes and black hair. He usually wears a red beret, with the Poké Ball logo on the side of it. He also wears a blue Pokétch on his left arm.

Lucas wears a white undershirt with a black vest over it, that has a gray "V" stripe. He also has a red scarf, baggy blue jeans, and red/gray shoes.

Lucas now wears an outfit more suitable for the cold weather: a dark red full-sleeved shirt with a dark blue and black jacket over it, a white scarf wrapped around his neck, denim black pants with dark gray and white running shoes, and a dark red beret with a white and black semi Poké Ball on the back.

Lucas always seems to be an enthusiast. When the player character comes to Sandgem Town for the first time, he greets them and shows them the lab.

Lucas in Pokémon the Series (anime) 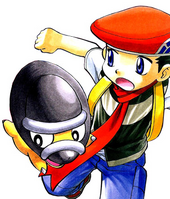 Lucas, known as Hareta, in Diamond and Pearl Adventure! (manga)

Lucas' Sprite from Diamond and Pearl

Lucas and Dawn at the beginning of the game.