Lucario and the Mystery of Mew

This Lucario is a Fighting/Steel-type Pokémon appearing as the titular protagonist of Lucario and the Mystery of Mew.

Lucario was originally respectful towards his master, Aaron; but after Aaron died, Lucario (unaware of his master's sacrifice) lost all respect for Aaron, and grew hostile and cold towards anyone he met; until he understood his master's actions and reason for doing so.

Over 1000 years ago, before the Invention of Poké Balls, Lucario served Sir Aaron, who in turn served Lady Rin, at that time, sacrificed his life to end the war occurring between two armies of Pokémon and to save Rin, the Queen of Cameran Palace and her kingdom, thus; becoming a legend, although Lucario was unaware. Lucario thought that his master had betrayed him and the kingdom. Upon being released from the staff of the guardian, he initially mistook Ash for his master due to their similar aura. Lucario later accompanied Ash and his friends to rescue Pikachu from the local Mew at the Tree of Beginning, however, Lucario had a falling out with Ash believing that the latter wouldn't hesitate to abandon Pikachu, thinking back to what happened between himself and Aaron. When arriving at the tree's heart, Lucario discovered that Aaron didn't betray him or the kingdom, for in which he begged for forgiveness. He then assisted Ash Ketchum in saving the Tree of Beginning by using their aura, but at the cost of his own life. Lucario soon died, telling Ash that Aaron is waiting for him. Shortly after, he was reunited with Aaron in the afterlife. 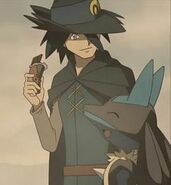