"Hey, kid! What do you think you're doing here? You won't live long in combat! Not with your puny power! I tell you, kid, electric Pokémon saved me during the war! They zapped my enemies into paralysis! The same as I'll do to you!"
— Lt. Surge, Pokémon Red, Blue, LeafGreen and FireRed

Lt. Surge serves as the Gym Leader at Vermilion City's Gym. He holds the Thunder Badge for the trainers that can defeat him, and specializes in Electric type Pokémon.

Lt. Surge resembles an adult with spiked blond hair and light skin. In Red and Blue, he wears a military jacket and black boots.

Lt. Surge's build is that of a large, muscular man, having tall stature and a very muscular body.

Lt. Surge is serious and always flared up. He appreciates challengers who are persistent.

The name Lt. Surge originates from "lieutenant" (shortened to form Lt.) and "surge" (referring to surging electricity). It may also be a play on "sarge", a shortened informal term for the title "sergeant".

His Japanese name, Machisu, may originate from "machine" or "march" (as he was military personnel). It may also involve "Clematis", a genus of flowers, following the plant-based naming of most Gym Leaders.

Lt. Surge first appeared in the original Pokémon games, as the Vermilion City Gym Leader. He would later be in Pokémon Gold and Silver in the same position. Again, he appeared in the Red and Blue remakes, Pokémon FireRed and LeafGreen, with an updated appearance. 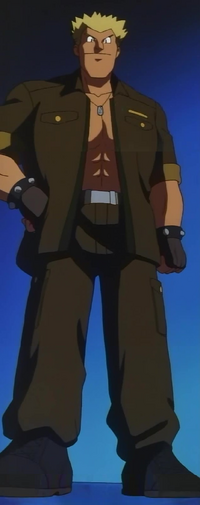 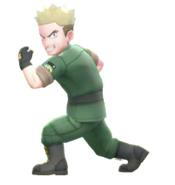 "I tell you, kid, electric Pokémon saved me during the war!"

"When I was in the Army, Lt. Surge was my strict CO.

He was a hard taskmaster."

"Lt. Surge was always famous for his cautious nature in the Army."

"Lt. Surge installed the traps in the Gym himself.

He set up double locks everywhere."

"Lt. Surge is rumored to have been a pilot while home in America.

He used the electricity generated by Pokémon to power his plane."

You electrified me in our battle!

I didn’t know that there were gutsy trainers like you.

It made me change my mind about you!"