For the variant appearing in the games, see Lorelei.

Lorelei, named Prima in the English dub, is a character appearing in Pokémon the Series: The Beginning.

In the dub, her role was changed to a master on the island.

Lorelei is a woman, with violet hair in two pigtails and a ponytail. She wears a pair of glasses, with her eyes being hazel-colored. She wears a blue jacket, a red shirt, and a black pencil skirt.

Lorelei is a calm person, who is indifferent to her fans and usually ignores them, showing her eccentric side a bit. She believes the strategy in battle should be fluid, so one should change their tactics, depending on the situation. Her strategy consists of freezing her enemies with ice, then turn defensive by remaining still and silent.

This section, or a part of it, has been transcluded from Lorelei; any changes involving it should be made there instead. /

Her Japanese name, Kanna, could originate from 寒 (kan, cold). It could also come from "Canna", a genus of flowering plants.

Her dub name, Prima, could come from "prime" or "prima donna".

Lorelei was a famous trainer around the Orange Islands. She came for an exhibition battle, though Misty and Tracey came to admire her. Misty wanted some advice, and Tracey wanted to make a picture of her, but Lorelei ignored them both and focused on Misty's Togepi. Lorelei ignored Misty and Tracey, who wished to know more about her, and even ignored Ash's challenge for a battle. Lorelei watched the sea, while Ash thought she was too afraid to lose in a battle and faced a trainer. However, his Charizard went out of control during the battle, so Lorelei had Slowbro use Disable, which stopped Charizard, enough for Ash to call it back. Lorelei suggested Ash should train Charizard better, though Ash stated she was replying things he knew already. Ash mentioned being in Top 16 of the Indigo League, though Lorelei stated "he does not understand" and walked away, suggesting they should come and see her exhibition battle. The heroes watched the battle, and were quite impressed by Lorelei. Ash stated he was also strong, though Lorelei suggested to share that strength with his Pokémon. This time, Lorelei accepted Ash's battle and sent Cloyster to battle Ash's Pikachu. After Cloyster resisted damage by withdrawing into its shell and using Reflect, it counterattacked with Rage and Aurora Beam. Lorelei apologized for being harsh in the battle, but wanted to point out to Ash he was confident in his skills, though the victories he earned were accomplished by his Pokémon. She also stated that Ash should lose sometimes to see, through strength, that his Pokémon and friends did care about him. Thus, she emphasised that the bonds he shared with his Pokémon had to be strong. Ash thanked Lorelei for the advice. Just then, Team Rocket appeared and attempted to snatch Pikachu, but were blasted off by Jynx's Ice Punch. Ash promised to heed the advice Lorelei gave to him in his next Gym Battle. His friends also promised to take the advice, as they all bid farewell to Lorelei.[1] 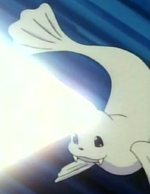