"Welcome to Pokémon League! I am Lorelei of the Elite Four! No one can best me when it comes to icy Pokémon! Freezing moves are powerful! Your Pokémon will be at my mercy when they are frozen solid! Hahaha! Are you ready?"
— Lorelei in Red, Blue, and Yellow.

Lorelei (named as Lorelai in Red, Green, Blue and Yellow) is the leader of the Elite Four in the Kanto region. She specializes in using Ice-type Pokémon. Her strongest Pokémon is her Lapras. She lives on Four Island, and is known to have a large assortment of dolls.

Lorelei is a lithe and curvy woman, whose hair has two pigtails and a ponytail. She wears a pair of glasses, with her eyes being hazel-colored.

She wears a blue jacket, a red shirt, and a black pencil skirt reveals her legs. Lorelei has violet hair.

Her outfit in Yellow is the same as it is in Red, Green and Blue.

Lorelei wears black clothes, with details in blue, she wears brown tights and a blue shirt underneath her clothes.

Confident and professional, Lorelei may look like a Librarian or Secretary. But deep down she's a child at heart, as evidence to her hobby of collecting dolls, meaning that she seems to have a habit of treasuring the past (or at least children's toys).

Her Japanese name, Kanna, could originate from 寒 (kan, cold). It could also come from "Canna", a genus of flowering plants. 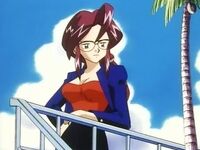 Lorelei in Pokémon the Series (anime)

Lorelei's VS sprite in Red & Blue

Lorelei's VS sprite in Yellow

Lorelei's VS sprite in FireRed & LeafGreen