Member of the International Police

Looker is a top officer of the International Police. He was introduced in Pokémon Platinum. His real name is unknown; "Looker" is

Looker is very creative and figures out things at any risk being held. He is also a caring man with a good heart, caring for those who cannot take care of themselves, and values the friends he makes. But most the time, he is a little strict, holding cases for one thing, and prefers pondering a lot rather than expressing himself through words. He is quite dedicated to his job, and becomes serious when it comes to crime fighting.

Looker makes his debut in Pokémon Platinum Version. He first appears in Jubilife City, where he introduces himself to the player character. He appears often in the game to aid the player character, although not necessarily with battles. He is on a mission to stop Team Galactic from causing havoc in the Sinnoh region. After stumbling upon Charon's notes at the Team Galactic HQ in Veilstone City, Looker eventually arrests Charon, one of the team's four commanders.

Looker returns once again in [[Pokémon X and Y]. After defeating the Elite Four and Diantha, the Pokémon Champion of Kalos, one will receive a Holo Caster call from Looker who has not yet revealed himself and will tell to meet up in his Headquarters near Rouge Plaza in Lumiose City. This starts the beginning of a post-game side quest story which ends in Looker capturing the mastermind behind Team Flare and him leaving the region.

Looker once again returns in Pokémon Omega Ruby and Alpha Sapphire. After getting access to the Battle Resort, if going east and a little north from the bridge one has entered the resort in, one will encounter Looker who is washed ashore and dehydrated, asking the player character where he is, giving the choice of saying "Hoenn region" or "Battle Resort". Then a woman (with the Beauty Trainer Class model) comes by asking what happened. She said she has no other choice than to bring him to the cottage. When going to the northeastern cottage in the place where the Dragon Tamer says about changing his Druddigon's Ability, one will find Looker. When talking to the lady, she says he has a bad case of amnesia. When talking to Looker he says what he can only remember, when he was washed ashore and meeting the player character. To thank the player character for saving him, he gives them an Audinite, the Mega Stone for Audino, where he then asks to himself who he is.

Yet again, Looker makes his appearance in Pokémon Sun and Moon. This time, he is investigating the Ultra Beasts with Salon Maiden Anabel. The first task he gives the player is to go to Aether Paradise to investigate an Ultra Beast. These games also revealed that ten years ago, Looker and Nanu were teammates in the same squad to capture a Guzzlord, but their mission failed due to their inadequate strength and wrong strategies, coupled with their sympathy towards the Guzzlord, which led to the fall of their Faller teammate. But both then found an amnesic Anabel and took her in.

Looker in Pokémon the Series (anime) 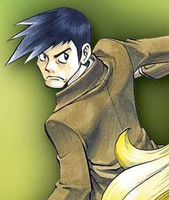 Looker in Diamond and Pearl Adventure!

Meeting Looker in Black and White.

Looker and the Player in the Looker Bureau in X and Y.

Looker and Anabel with the player in Pokémon Sun and Moon
Community content is available under CC-BY-SA unless otherwise noted.
Advertisement