Pokémon Wiki
Register
Don't have an account?
Sign In
Advertisement
in: Male characters, Pokémon the Series: XY and XYZ characters

Locke is a minor character appearing in Pokémon the Series: XYZ.

Ed trained his apprentice, Locke, in locksmithing. Ed noticed Locke was not gentle with locks and gave some pointers, claiming Locke needed more training. This caused Locke to leave Ed with Lefty and disguise as a thief, who really didn't steal anything, since he merely wished to open his master's locks.

Locke is a mysterious thief who named himself "Master Thief Keys". He showed up at an exhibit that Ash and co. were visiting. Locke unlocked a jewel case before leaving. He came to a secret place, wishing his master would recognize his talent. Just then, he was being captured by Team Rocket, who wanted to use him for their goals. Team Rocket forced Locke to come to the Pokémon Center and open a lock. However, Locke turned on them and tried to escape with Lefty. Team Rocket had their Pokémon attack Locke, but missed and got a machine damaged, which exploded and blasted Team Rocket off. This also lit the Pokémon Center on the fire, so Locke went in to save the Pokémon inside. After the heroes found Locke, who was trapped behind a door in a building, which was lit on fire, Bonnie went to seek Ed out and informed him what happened. Ed came to the Pokémon Center and went through the fire, managing to unlock the lock with Locke's help. Locke managed to rescue the Pokémon trapped inside the Center, with Ed's help. In the end, Officer Jenny took Locke to the police station, but Ed told the heroes Locke wouldn't be arrested, since he didn't steal anything, as he merely opened the locks and wished Locke would return to him. 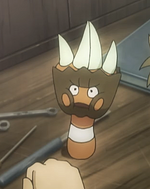