Litten (ニャビー, Nyabii) is a fire-type Pokémon. It is one of the three Starter Pokémon of the Alola region, the other two being Popplio and Rowlet. It evolves into Torracat.

Litten is a small kitten-like Pokémon, with black fur. It has a short nose, red eyes with yellow sclera and short ears with gray insides. It has two stripes on its head with a vertical line intersecting them. The lower part of its face is red with two tufts of fur on each side. It has a long tail with a tuft of fur at the end. When it curves its back, three pointed tufts with red tips show up along the spine.

Litten always appears to be very calm, and does not show emotion. Since they don't bond with many people, Litten are hardheaded and stubborn. However, when its trainer and partners get into a pinch, it will make an effort to save everyone it trusts and cares about.

Since its fur is oily, it can breathe out fireballs after licking its fur.

Litten evolves into Torracat at level 17 and then Incineroar at level 34.

Litten is based on tabby cat and black cat kittens. Its coloration also resembles that of tigers (as its final evolution, Incineroar, is based on one). Theme-wise, Litten may be based on the alchemical prime sulfur, associated with fire as it is flammable and often found around volcanoes, Litten's eyes and the red marking on its forehead forming a similar symbol to the one used for black sulfur (🜏).

Litten comes from lit (on fire), little and kitten. 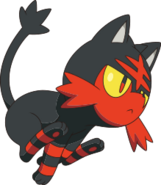 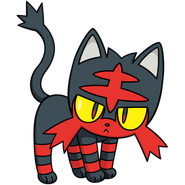 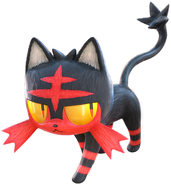 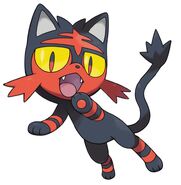 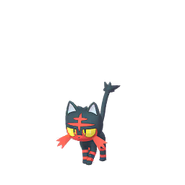