Lisa Ortiz (born December 11, 1974, New York) is an American voice actress and voice director who was one of the original voice actors of Pokémon along with Veronica Taylor, Eric Stuart, and Jimmy Zoppi. She voices Miki, Liza, Sabrina, Flannery, and many more. Other renowned voicework includes Amy Rose from Sonic X, Deedlit from Record of Lodoss War and Lina Inverse from Slayers.

She is the current voice director for the Pokémon anime, succeeding Tom Wayland. 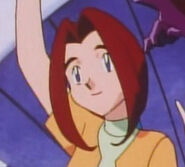 Marina from the Orange Islands

Teddiursa From DP143
Add a photo to this gallery
Retrieved from "https://pokemon.fandom.com/wiki/Lisa_Ortiz?oldid=1112578"
Community content is available under CC-BY-SA unless otherwise noted.