Lilligant is a large plant-like Pokémon that has a slightly humanoid feminine appearance. Her "skirt" resembles a plant bulb. Her face and torso are white, while the rest of her body is mainly green and leafy. She appears to be wearing a cloak of dark green leaves. She has a bright orange lily-like flower on the top of her head with a crown atop of the blossom. She has a leafy yellow collar, and rounded light green leaves for arms. She has one long, large leaf on the back of her head that resembles flowing hair and she has orange eyes. Below her bulb-like mid-section, she has a cluster of four curled yellow foot-like limbs that allow her to stand upright.

Lilligant has a crown-like flower on her head which emits a sweet aroma. This fragrance is considered to be as long as you can get a relaxing effect.

Lilligant are popular among celebrities. Nonetheless, it's hard to let the flowers on their head bloom, because if they get lack of attention, the flower will wither.

Lilligant mainly live in forests (such as Pinwheel Forest) of Unova and meadows of Alola.

Lilligant appears to be based on the Rafflesia and noblewomen from the late 18th Century in Europe. Her ability to emit relaxing aroma might be based on carnations or citrus.

Lilligant's English name is a combination of the words "lily" and "elegant".

Her Japanese name, Dredear, seems to be a combination of "dress", "dear", "lady", and Dianthus, a species of plants that produce carnation flowers. 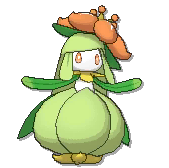 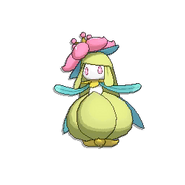 Add a photo to this gallery
Retrieved from "https://pokemon.fandom.com/wiki/Lilligant?oldid=1055856"
Community content is available under CC-BY-SA unless otherwise noted.