Lillie's artwork for Ultra Sun and Ultra Moon and Sun and Moon.

Lillie is a character who appears in Sun and Moon and Ultra Sun and Ultra Moon. She is Professor Kukui's mysterious assistant.

Lillie is a young girl with green eyes and platinum blond hair, with two braids at each side of her face. She wears a large white hat, with a blue ribbon around it. Lillie wears a white dress with transparent outlines, a pair of long socks and white shoes resembling ballet flats. She also carries a round bag with a Poké Ball design on both sides. As later revealed, Lusamine made the choice of Lillie's dress for her, likely with the intent of resembling a Nihilego given her obsession with that species of Ultra Beast.

After realizing her mother is too far gone to listen to reason, she temporarily changes her outfit to a white sailor-like shirt with a blue ribbon and a very short white miniskirt with a light blue line. She stops wearing her hat, instead restyling her hair as a ponytail tied together with a braid. She also wears a pink backpack with a white ribbon and white penny loafers with white ankle socks.

Lillie is a mysterious girl who assists the professor for personal reasons. She's not fond of making Pokémon fight in battles, but she loves reading and has devoured many books. Lillie was revealed to have taken a Cosmog from her mother, and along with Kukui and Burnet are studying the Cosmog and its secrets.

Lillie originally had a close relationship with her mother, as she mentioned sleeping in Lusamine's bed as a child. However, over time, Lusamine started becoming insane and grew even madder when Gladion escaped Aether Foundation two years before the story begins. She became unbearable to Lillie, so she left as well. When the player character and Lillie meet Lusamine in Ultra Space, she gets the courage to yell at Lusamine for being terrible for trying to control her and stating that "children are not just things that belong to their parents". After Lusamine gets separated from Nihilego, she regains some of her sanity back and touches Lillie's cheek. Lillie eventually decides to travel to Kanto to find Bill so that he may give her the cure for Nihilego's poison. Lillie also decides to go to Kanto to become a true Pokémon Trainer so that she may earn badges and meet and catch lots of wonderful Pokémon.

The name Lillie originates from "lily" as her white dress resembles the white petals of a lily flower as well as the name following the plant-based naming of characters.

Lillie can be found near the Ten Carat Hill entrance on Saturday evenings staring at the night sky with something in her bag.

Lillie is first seen in the intro of the game three months before the story takes place, fleeing from Aether Paradise. She is cornered by three employees, but Cosmog teleported them out of the paradise. She is found by Professor Burnet at the beach and she tells her husband. Professor Kukui took her in and gave her a place to stay.

Lillie's role in USUM is very similar to her role in the original games. However, after Nebby evolves, it fuses with Necrozma and escapes through the Ultra Wormhole after being defeated by the player character. Lillie becomes a trainer, but she cannot be challenged in any point of the game, she's just an ally in Multi Battles.

After the Team Rainbow Rocket episode, in Kukui's house, Lillie asks the player character that she wants to be their partner at Battle Tree.

Lillie in Pokémon the Series (anime)

Lillie with Lusamine and Gladion in the Masters trailer (anime) 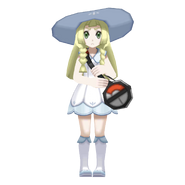 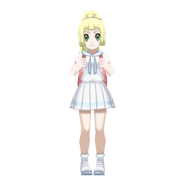