For the variant appearing in the games, see Leon (Galar).

Flash of the Titans!

Alejandro Saab
Leon is a character appearing in Pokémon Journeys: The Series, who is the Pokémon Champion of the Galar region and the current "Monarch" after winning the World Coronation Series, winning against Lance and Raihan.

Leon has purple, long hair and amber eyes. His cap is always pointing up to look like a crown, and he wears a cape which has logos of sponsors on it. His black striped shirt has a sword and shield on it.

Leon is a very kind and compassionate human being who is also confident and focuses on himself and his winning streak. Leon also seem to to have some great interest in very special unrefined Trainers like Ash, as he saw potential in him in their first battle.

In his childhood, Leon and his friend Sonia used to have a shared ambition of becoming the strongest Trainers together. Although it was Sonia who initially instilled knowledge about Pokémon to him, he soon demonstrated powerful talent after becoming a Trainer himself, proven by how he was able to triumph and become the Champion by a landslide victory when he participated in the League for the first time. However, his success eventually resulted in him and Sonia drifting apart from each other.[1]

Ash and his friend Goh went to the Galar region, where they saw Leon and Lance compete at the World Coronation Series finals. In their battle, Leon use his Charizard while Lance used his Gyarados. As the match began, Leon commanded his Charizard to use Flamethrower which intercepted by Gyarados Hyper Beam. Leon ordered Charizard to continue attacking with Air Slash and a series of Thunder Punch, only for Gyarados to counter with some of its own moves. As the battle continue, Leon and Lance both decide to turn the match into a Dynamax battle. Lance Dynamax his Gyarados, while Leon Gigantamax his Charizard. Leon and Charizard were able to weaken Lance's Gyarados, with Max Lightning and Max Airstream and was able to finish the match off with G-Max Wildfire. After the battle, Lance congratulated Leon during their battle as Leon comments on some Lance's own skill where train at Galar Dragon gym. Leon was the declared As the first "World Champion". In the crowd Ash and Goh were amazed by Leon's with the former wanting to battle Leon himself. When the match ended, the Wyndon Stadium was attacked by a wild Drednaw after Team Rocket accidentally provoked it and caused it to change into its Gigantamax form.[2]

Leon went outside of the stadium to check out the situation, where he saw Ash's Gigantamax Pikachu battling the Gigantamax Drednaw. As he were watching the fight, he notice that Ash didn't battle with a Dynamax Band. As Drednaw launches the Rock-type Max Move: Max Rockfall, Leon gives Ash advice by telling him to have his Pikachu use special G-Max Move: G-Max Volt Crash. Thanks to Leon's advice, Pikachu defeated Drednaw, with G-Max Move and reverted back to its normal size. Leon came down to thanks Ash and Goh for their heroic deed where Ash ask Leon for a battle. Leon was surprise by Ash's request as he had him ad by this. The next day, Leon meet Ash and Goh at the Pokémon center in Wyndon, where he accept Ash offer and prepare their battle. At the Wyndon Stadium, Leon gave Ash his own Dynamax Band and gave Ash an explanation of how Dynamaxing and Gigantamaxing worked, including their Max Moves and G-Max Moves. During their battle Leon and his Charizard had the upper hand during the first part of the battle where they easily countered Ash and Pikachu. As the fight goes on, both Ash and Leon Gigantamax their Pokémon. Ash and Pikachu were able to land couple on Leon's Charizard but still got overpowered which led them to their defeat. After Leon's gave Ash and Oran berry for his Pikachu, which Ash thanks Leon for their battle. As Ash tries to return his Dynamax Band, Leon told him he can keep it as he like unrefined trainers like Ash and tell him to "pop" more if he want to satisfy him. When Leon leaves, Ash request another battle from him the next time they meet, with the former promise for their rematch to be an official one with a crowd.[3]

Leon arrived on his Charizard to put a stop to a rampaging Gigantamax Centiskorch. He and Ash then flew off to deal with a rampaging Dynamax Pangoro. 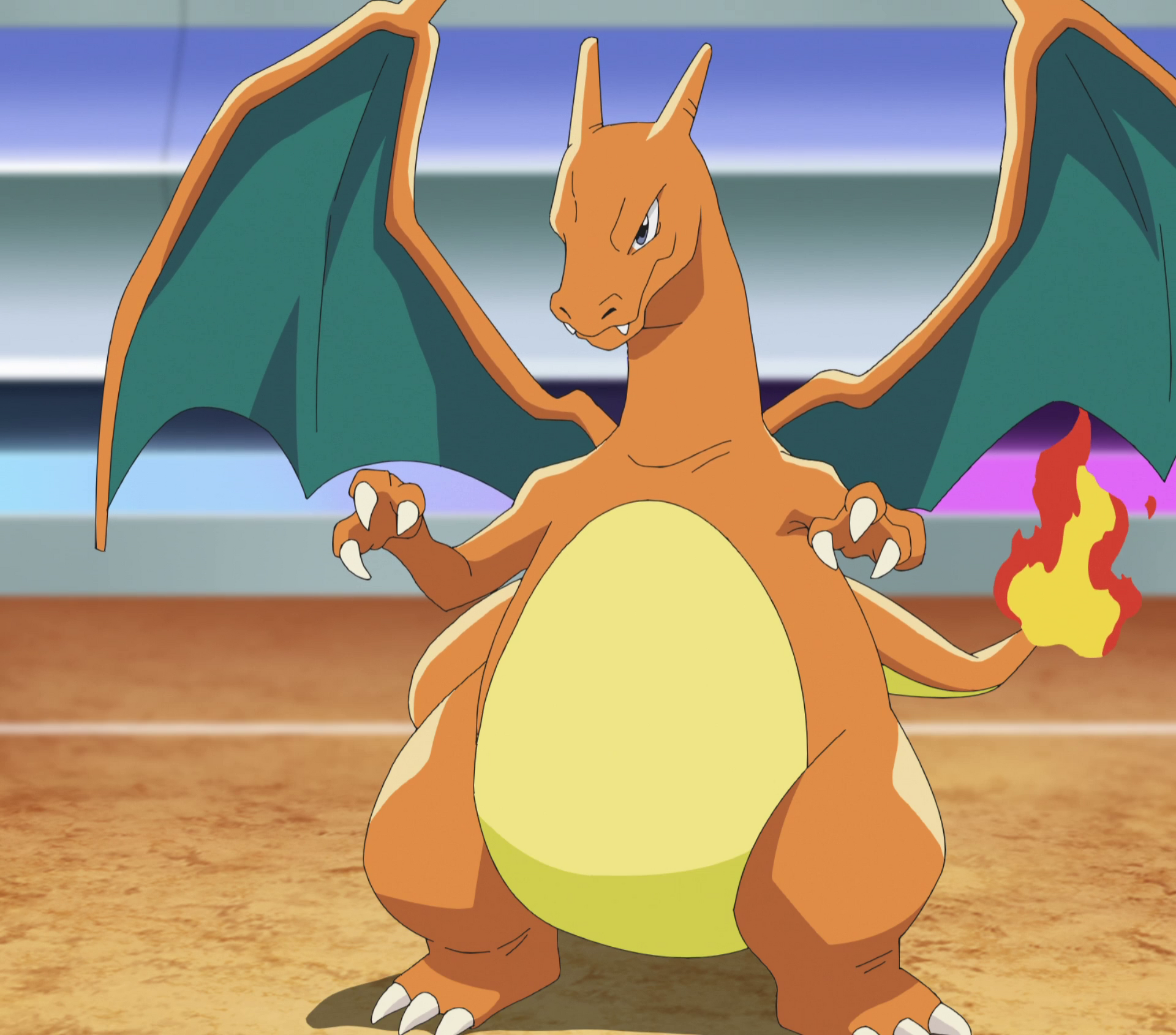 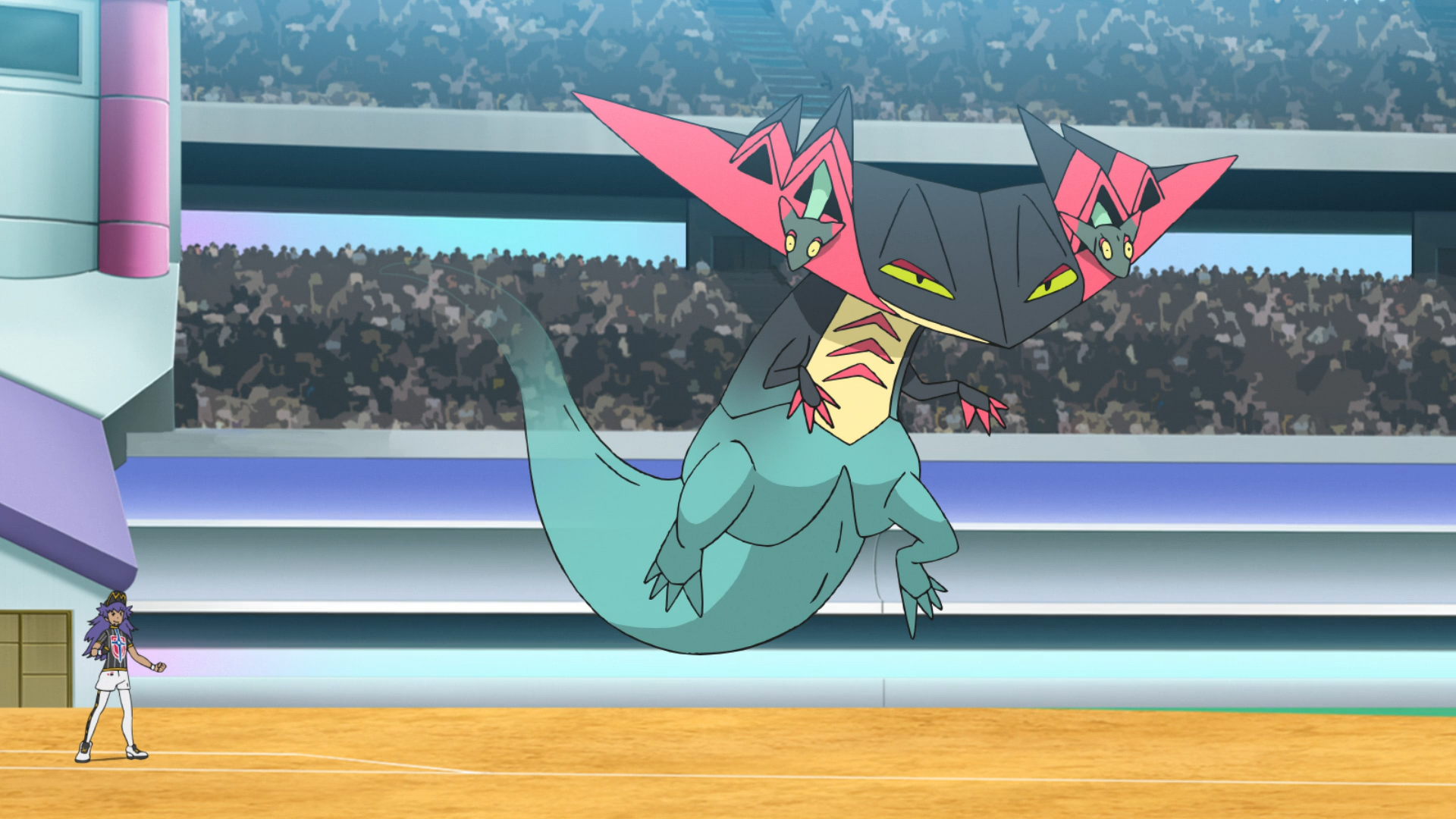 Leon without his cape
Add a photo to this gallery

Retrieved from "https://pokemon.fandom.com/wiki/Leon_(anime)?oldid=1361507"
Community content is available under CC-BY-SA unless otherwise noted.