For the variant appearing in the games, see Lenora.

Lenora is a character appearing in Pokémon Adventures, who was the Gym Leader of Nacrene City in the Unova region.

Lenora is a tall woman with black skin, teal hair and blue eyes. Lenora wears a striped headband, with a white shirt with a white ribbon on her neck, as well as orange flats, teal pants and a khaki apron with orange pockets. Lenora also wears a red lipstick on.

One day, Lenora visited Chili, Cilan and Cress, who were promoted to Striation City's Gym Leaders. She praised the three brothers, and stated there was no reason to feel down that three of them were managing one Gym. She stated they could teach new trainers about type interactions, about the advantages and disadvantages between Fire, Grass and Water-type. She exclaimed it was vital for the Gym Leaders to teach that, to which the brothers confirmed.[1]

Black researched that Cilan was a Gym Leader that he'd have to defeat on his way, to participate in the Pokémon League.[2] Virizion, Terrakion and Cobalion - the three Sacred Swords - traveled across the Unova region, and saw that the Gym Leaders had a strong bond with their Pokémon.[3]

Black, who came to Nacrene City, went to challenge the archeologist Lenora, who had the Normal-type Pokémon Patrat and Stoutland.[4]

Lenora welcomed Black via intercom and was impressed with how quickly he solved her library puzzle, under 3 minutes and 30 seconds. She was also impressed with how thoroughly he had researched her to prepare for their battle, remarking that Black was not just a big mouth, since he used to spend time at libraries researching stuff. She started with Stoutland and used the Roar strategy on Black, aborting his plan to have Munna use Hypnosis and put Stoutland to sleep. Roar drawed out Black's Braviary, as Lenora had planned, and she immediately used Ice Fang to deal Braviary some serious damage. Black realized that her Patrat had excellent sight, which allowed her to detect that Black would be using Brav for the battle. She commented to Black that what he studied won't always be useful in battles, and claimed he reached his limits, as Stoutland rammed Brav to the wall. Black asked as to why she built the room in her basement, to which Lenora answered that battles and artifacts inspired her, and kept the latter as not to lose them. Black saw her passion to the artifacts, and proclaimed his dream to win the Pokémon League, for which he and his Pokémon had trained hard to achieve. Lenora became amused, as Braviary's body was nearly frozen. However, his Braviary used Whirlwind to force Stoutland to retreat, bringing out Patrat and knocking Patrat out with Air Slash, which even Patrat's powerful sight couldn't see coming.[5]

With Patrat defeated, Lenora sent out Stoutland again, and as she saw Black thinking furiously for a strategy, called that she loved kids who used their heads. Stoutland's Last Resort knocked out Braviary. As Lenora mused how frustrating it was not to make countermeasures against moves that he even predicted, Black sent out Musha. Musha kept using Hypnosis, trying to put Stoutland to sleep. As Black blamed the low accuracy of the move, Lenora asked Black if the accuracy was the problem here. She showed that she valued their roots, for she was collecting rare artifacts that proved the origins. She stated Pokémon were the same, and stated her Stoutland was with her since it was a Herdier. She thought Black was conflicted, as he was a smart kid to know that, yet blamed accuracy for his failure. Stoutland easily dodged everything because it had special whiskers that allowed its superior senses. Black realized that he couldn't have the same move repeated over and over, and wanted to end the fight. Thus, Stoutland knocked out Munna with Take Down at the same time that Munna knocked out Stoutland with Zen Headbutt; Munna's attack was successful because of the damage Stoutland had taken from Take Down's recoil. For his victory, Lenora gave Black the Basic Badge, showing that Stoutland was the one that fainted first, due to Take Down's recoil damage. She and Hawes watched as White dragged Black away, announcing her new dream to form a musical at Nimbasa City. As Lenora was laughing to see children with such dreams, she received a phone call from Clay. He had found a mysterious stone and wanted her to protect it and study it because he thought it had a terrifying power. Looking serious, Lenora agreed to go pick it up.[6]

Lenora went away when she was contacted by Hawes. Her husband was upset when the skeleton was stolen, to which Lenora swore to return after her mission was over, and asked of Hawes to pull himself together. She also called Burgh, who was in Nacrene City, to help with the investigation.[2] Clay actually passed the Light and Dark Stones to Lenora, from which she hid the Light Stone in order to keep it as a secret from their enemies.[7] Lenora and Hawes were studying the Dark Stone at the museum. Researching some ancient texts, she believed the Dark Stone was the sealed form of Zekrom.[8] At the museum, Lenora simply displayed the Dark Stone, while Hawes hid the Light Stone in the basement.[7] Lenora called other Gym Leaders to meet her at Nacrene City museum: she displayed the Dark Stone so the enemy would take the bait, and the Gym Leaders would be ready to fight them.[9]

Lenora had Patrat and Stoutland look out to find someone. The two Pokémon haven't found anything, however. As a device was spying on Lenora from a tree, she turned around, but only saw some type Pokémon flying from the tree.[8] Seeing there was no threat around, Lenora counted it was a month since they obtained the Dark Stone. She seemingly believed that there was no threat around, and went with Hawes to lower the museum's security, as it was driving away the visitors.[10] At evening, Hawes and Lenora spotted the Shadow Triad trying to break into their museum to steal the Dark Stone. She identified them to be Team Plasma's forces, and started a battle with them, only to delay them until the Gym Leaders' arrival. Lenora had difficulty battling them, as the Shadow Triad claimed they were waiting for her to drop her guard to swoop in and take the stone. However, in that moment, the Gym Leaders arrived and joined Lenora to battle the Shadow Triad.[11]

Lenora faced the Shadow Triad, and teamed up with Skyla to confront one of the intruders. Lenora's Patrat used Retaliate, while Lenora called Skyla to have Unfezant use Razor Wind, which she did. Black noticed Lenora has even improved her battle skills, to which Lenora thanked him, and had him defend the museum. While battling, she noticed how amazing Brycen was, as his tactics allowed him to capture the Shadow Triad with an icy chain. The Gym Leaders confronted the Shadow Triad, and demanded of them to take them to Team Plasma's king. However, the Shadow Triad called upon the Weather trio: Tornadus, Thundurus and Landorus, who emitted a giant surge of energy, forming a whirlwind that engulfed the Gym Leaders. To save the Gym Leaders, Black went to attack, and his Nite evolved.[12]

However, Black failed to hit Tornadus, Thundurus and Landorus, who blew him away. Lenora, however, smiled, as they have hidden the stone in the basement, and the entrance was sealed with a very strong material, which the Shadow Triad could not blast through, even with the Legendary Pokémon. Without further ado, Skyla, Clay, Burgh, Elesa, Lenora and Hawes were taken away, while Brycen made a dummy ice sculpture of himself to escape their capture. However, Lenora winked to Black, who realized he could enter the basement through the library.[13] Brycen was searching far and wide to find any traces of Team Plasma, and wondered where the Gym Leaders, like Lenora, could have been taken to.[14]

When the Pokémon League began, Caitlin used her powers, and detected that the Gym Leaders were in a dark place. She conveyed their message: "HELP".[15] Caitlin went to Black, who was having a battle against Drayden. Caitlin interrupted the battle to have Gothitelle touch Black's head, linking his mind with the Gym Leaders, who were trapped in a strange dark place. Skyla, Burgh, Elesa, Clay, Lenora and Hawes appeared in Black's mind, who asked of him not to be gloomy, and not to give up. They apologized for putting a lot of strain on Black, and have heard that Black's Musha had abandoned him. Black didn't want their condolences, believing Musha would've abandoned him sooner or later. Lenora reminisced that Black did refer to himself and his Pokémon as "us", as a team, when he had battled her. The Gym Leaders exclaimed that Black had defeated them all because he was listening to his Pokémon, and the answer was inside of him.[16]

Brycen, who heard the news about the missing Gym Leaders, suspected that their memories have been wiped out, for they could not remember where they were taken to.[17] As N's castle emerged from the ground, Ghetsis revealed that Clay was crucified, along with the rest of the captured Gym Leaders.[18] The trainers, who fought to release the Gym Leaders, had Patrat chew off the ropes binding them. The Gym Leaders were released, and joined the fight against the Team Plasma Sages.[19] With the battle over, Lenora watched N departing away with Zekrom into the sunset.[20] 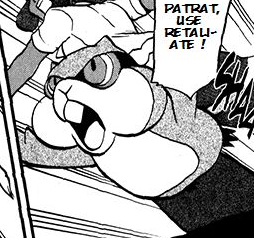 Retrieved from "https://pokemon.fandom.com/wiki/Lenora_(Adventures)?oldid=1157395"
Community content is available under CC-BY-SA unless otherwise noted.