An Archaeologist With Backbone

Basic Badge
Lenora is Gym Leader of Nacrene City in the Unova region. She is a Normal-type leader. She rewards the player character with the Basic Badge if they defeat her. Lenora first appeared in Pokémon Black and White. Lenora goes to visit Sinnoh League Champion Cynthia in Undella Town. In Unova, Lenora is the second Gym Leader to be battled.

Lenora is a tall black woman with curly cyan hair and blue eyes. Lenora wears a striped headband, with a white shirt with a white ribbon on her neck, as well as orange flats, teal pants and a khaki apron with orange pockets. Lenora also wears a red lipstick on.

Lenora is a very strong and capable middle-aged woman. She is the type to keep her word on things, judging by her relationship with her husband. Lenora prefers to be the assertive one between them. As seen by her study, she is quite organized and neat.

The name Lenora comes from "normal" and possibly "aloe", following her Japanese name.

She's an expert on bones and fossils, which make her an authority on the museum along her husband. After being defeated she appears along the other Gym Leaders to battle Team Plasma's Seven Sages.

She is no longer a Gym Leader and is instead the director of the museum. When the player visits the museum, Lenora offers one of two Fossils to bring back as a living Pokémon. If Memory Link is used, it is shown in a flashback that Lenora is visited at her studio by Burgh who is intrigued about bones due to Bug Pokémon having exoskeleton instead. Lenora mentions how she took a liking to bones as during her childhood, her father used to bring many bones, which sparked her curiosity and interest. Eventually Clay barges in with a fossil for Lenora to evaluate. Unfortunately for Clay who expected to sell it at a high price, the fossil was quite common, however with a rather unusual soil. This brings newfound hope for Clay to keep digging on his tunnel. Burgh questions Clay about what he thinks on bones. Clay replies that bones are what's left when one passes away. The three are seen satisfied with the many opinions on the subject. 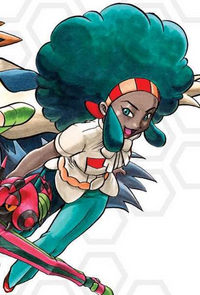 Lenora's VS. sprite in Black & White

Lenora's original Artwork
Add a photo to this gallery
Retrieved from "https://pokemon.fandom.com/wiki/Lenora?oldid=1422753"
Community content is available under CC-BY-SA unless otherwise noted.