The Legendary Birds are a trio consisting of Articuno, Zapdos, and Moltres. They are a group of Legendary Pokémon that appear in the Kanto region.

It is shown in the second Pokémon movie, Pokemon 2000: The Power of One, that if the three began to fight each other, Lugia, the trio master will rise to stop them, but it would need the help of the Chosen One, who turned out to be Ash Ketchum.

While Moltres was at the Kanto Pokémon Championship, in the GBA games, you can find Moltres in either Victory Road or on One Island. While Articuno is where Ash, his friends and Todd found it, in the game, it is in Seafoam Islands. While Zapdos is found during Season 5 near a pond, in the game, you can find Zapdos in the Power Plant.

Each of the Legendary Birds also have a Galarian Form that have been spotted in the Crown Tundra.

They can be seen with Lugia in Pokemon: The Power of One. 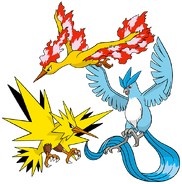 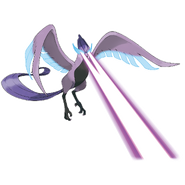 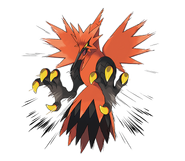 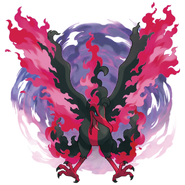