Latios is one of the main characters of Pokemon Heroes.

Latios and his sister, Latias, lived in the Secret Garden in Alto Mare, where they were the guardians of the Soul Dew. They were friends with Lorenzo and Bianca.

This Pokémon had a no-nonsense, very serious personality. Although he did not like to fight, he would attack intruders of the Secret Garden without hesitation or anyone attempting or succeeding in inflicting harm on his sister Latias. As a result of his personality traits, he was extremely protective of Latias.

Latios and Latias presented some very unique powers in the movie, such as sight-sharing, invisibility and shape shifting. They are also very fast and cover wide ranges in terms of orbits, and rather patient and tenacious. Other than that, he and his sister mainly fend off enemies, or emit powerful, protective fields of light that can be enhanced even further in cooperation when they are forced to do so. Also, thanks to his species' assets, he is very agile enough to dodge Pikachu's Thunderbolt quite easily. Fully adopting his abilities, this Latios also seemed to be good at surprise attacking. In summary, in spite of his dislike of combat, he is a skilled and fearsome fighter.

At the end of the movie, Latios had to sacrifice himself to save Alto Mare, and turned into the new Soul Dew, just like his father in the past (it was never said in Japanese version that Soul Dew is the soul of Latios and the father of the siblings).

At the end movie credits, two Latios can be seen flying with Latias. (The dub version removed the reference to the fact that many Latios and Latias visited and left Alto Mare frequently, causing some confusion to dub watchers when two Latios and a Latias appeared in the credits).

In The Mastermind of Mirage Pokémon, he was seen in Pikachu's memories.

Reconciliation after solving the misunderstandings

Latios trapped in the the DMA as a power source

Determining the readiness to save the city and people 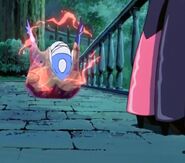 Latios subdued
Add a photo to this gallery
Retrieved from "https://pokemon.fandom.com/wiki/Latios_(MS005)?oldid=1163433"
Community content is available under CC-BY-SA unless otherwise noted.