Lara Laramie is a character appearing in Pokémon the Series: The Beginning.

Lara is the owner of Laramie Farm. She first met Ash, Misty and Brock when Ash tried to capture her Tauros and Growlithe not knowing that it was illegal. After Lara stops him, they became friends and stayed at Lara's home.

Lara was preparing for the annual race with her Ponyta. She had a rivalry with another racer Dario who owned a Dodrio and was taking part with it in the race. Fearing Lara and Ponyta's friendship and teamwork, Dario hires Team Rocket to stop Lara from participating in the race.

One night, Team Rocket manages to dement her horde of Tauros. When Lara arrives on her Ponyta, Ponyta panics and Lara falls off hurting her arm. Meanwhile, Ash calms down Ponyta efficiently. Noticing this, Lara asks Ash if would participate in the race on her behalf. Ash agrees but when he climbs onto Ponyta, he gets himself burned as Ponyta wasn't ready to ride with Ash. Lara scolds Ponyta and then after much practice, Ash and Ponyta become friends.

In the race, many trainers had participated including Brock and Misty with their Onix and Starmie respectively. Ash's Pikachu and Squirtle make their own pair during the race. Dario had hired Team Rocket to stop Ash and Ponyta from moving on. Supposing Ash would lead, Team Rocket dug a hole and hid it to stop Ash. But instead of Ash, a trainer on his Electrode was leading and fell into the hole. The Electrode exploded making Ash and Ponyta fall down along with some other trainers as Dario kept on moving with his Dodrio. Ponyta and Ash begin again and in no time, reached pretty close to Dario again.

The next obstacle was a lake with stone plates. Dodrio and Ponyta crossed the River efficiently. Starmie and Squirtle surf through the water. However, Onix gets scared upon seeing a trainer submerge with his Rhyhorn in the water. Onix and Brock quit the race.

Later on, the Pokémon had to finish the food from any of the plates and move on. Dodrio's three heads start fighting on who would eat first while Ponyta finishes her food quickly. Dario signals Team Rocket and they almost succeeded in delaying Ponyta. As Dario move on, James commanded his Weezing to use Smokescreen which caught fire upon coming in contact with Ponyta's flames. Misty, Starmie, Pikachu and Squirtle tell Ash to move on while they deal with Team Rocket.

Ponyta and Dodrio go head to head but Dodrio starts pecking Ponyta. Due to its immense desire of winning for its trainer, Ponyta evolved into Rapidash and wins the race as its long horn crosses the finish line first. After Rapidash won, Dodrio attempts to peck it again. However this time, Rapidash uses Stomp and sends Dario and Dodrio flying.

Lara then receives the prize and shares it with Ash and Rapidash. 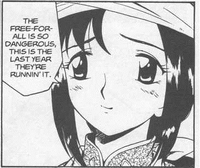 Lara Laramie in The Electric Tale of Pikachu (manga)