For the variant appearing in the games, see Lance.

Lance is a character appearing in the anime series, who is the Pokémon Champion in the Johto region and a member of the Elite Four in the Kanto region. He is also a member of the Pokémon G-Men organization that investigates illegal Pokémon activities and arrests related criminals.

Lance is a tall, thin man with bright scarlet red spiked hair, pale skin, and dark eyes. He wears a medieval-looking navy blue tunic with red-orange trim, a brown belt around his waist, and large black boots with orange two rings around the top of each boot. The cuffs of his long sleeves are black with orange zigzagging trim separating the cuff from the navy blue part of the sleeve. He sports a long, flowing cape around his neck which is black on the outside and crimson red on the inside.

His appearance remains unchanged from Pokémon the Series: Gold and Silver.

In Pokémon Journeys: The Series, his scarlet red hair is cut short and was less spiky as it is shown to have spiky ends.

His main outfit now resembles his counterpart in HeartGold and SoulSilver; his overall tunic is dark blue, the trims are now orange and his belt is black.

Lance is an honorable man, who fights against criminal organizations and will not let innocent people get involved, fearing they would be in danger. Lance also wears disguises and tries his best to fit into the group to learn more about the plans.

The name "Lance" is literally "lance", a weapon often used by knights, who are, in turn, often associated with fantasy and thus dragons.

His Japanese name, Wataru, comes from 渡る (wataru, an uncommon way of saying "to end" in Japanese, as he's the final Elite Four member in Generations I, III, and VII and the Champion in Generations II and IV). Following the plant-based naming of most characters, it could also come from 綿 (wata, the Japanese name for cotton).

Marina was a great fan of Lance's, who collected stamps of him and dreamed of teaming up with him and his Pokémon to become "the stars of the planet".[2]

Lance had his Dragonite defeat Tyson's Fearow with Thunder Wave while defending Ash, Misty and Brock from Team Rocket and told them to get back from the woods. As the heroes escaped to safety, Team Rocket attempted to chase them, but they were knocked away from Dragonite's Whirlwind. Lance escaped while mounting on his Dragonite to fly away. Lance met up with the heroes, while Brock and Misty noticed that Lance is an undefeated Champion of Elite Four and the unbeatable Dragonite trainer. Lance also worked as one of the Pokémon G-Man to investigate the foul play in Lake of Rage, much to their surprise. He knew Team Rocket did an experiment on Pokémon, such as the Red Gyarados they saw in the lake. Ash decided to help Lance, but he refused, due to the danger in the forest; Lance let them point at the right path lead to Mahogany Town. Lance managed to subdue one of the Team Rocket grunts as he disguised himself up to pose as one of the grunts. Later, he saw Ash and his friends return to rescue the unconscious Red Gyarados, who was captured from a Team Rocket boat. Lance was surprised to hear from Professor Sebastian to activate the evolutionary wave to make the Pokémon weak from the waves. When Ash and his friends were captured, Lance finally knew their plot when Professor Sebastian explained their plans about the evolution inducement wave, which made the Pokémon forcibly evolve within the waves, including the Red Gyarados, who evolved from a Magikarp. As the Red Gyarados was put on a sealed truck to be taken to the laboratory, Lance continued to pose as one of the grunts to know more of their motives.[3]

Lance returned to save the heroes, by using Dragonite to take down Jessie's Arbok with Thunder Wave. Lance finally removed the disguise to reveal himself to the trio and eventually blasted them off by Dragonite's Twister. Lance scolded the heroes for not listening to his warning. After the heroes apologized, Lance had his Dragonite destroy the laboratory with its Hyper Beam. As he pursued with the heroes to stop Team Rocket by heading to Mahogany Town by a car, Jessie informed Tyson about Lance and the laboratory's destruction. By the time the Red Gyarados began to transport, it soon awakened and managed to destroy the chopper. Lance was forced to fight Tyson with two Fearow, as he used Dragonite to fight in a handicap. Regardless, it managed to defeat the two Fearow with a single Twister, as a result of Tyson's defeat causing him to be apprehended by Officer Jenny and the other police officers. Later, Lance used Dragonite to battle the enraged Red Gyarados by paralyzing it with Thunder Wave and defeat it with its Hyper Beam, despite the heroes warning him not to hurt it. Since Lance wanted to save it, he used a Poké Ball and successfully caught the Red Gyarados. With Mahogany Town saved, Lance parted ways with the heroes, thanking them for the help. He also told them he would take care of his Red Gyarados, stating he is its friend as he flew off on his Dragonite.[4]

Lance disguised himself as a Team Magma grunt to find more about their plans. He also confronted Shelly, the commander of Team Aqua and Archie's right-hand woman, who release the ancient Pokémon, Kyogre from Team Magma's submarine. He also noted Team Aqua was also a criminal organization. He wanted to seek more help and noticed Ash, Brock, May and Max on Team Magma's ship. Ash was knocked out by a blast, while Lance sent his Red Gyarados to save his friends, who were drowning. Later, when Ash was captured and Pikachu, which was bonded within Blue Orb, were in Team Magma's helicopter, Lance approached them both. He took off his disguise, making Ash pleased to see a familiar face amidst the enemy. Lance explained he was here to stop both Team Magma and Team Aqua for misusing both Ancient Pokémon, Groudon and Kyogre. Ash was worried about Pikachu, who started losing control of the Blue Orb; Lance noted how the Red and Blue Orbs were known to take control of people's minds. Still, Lance told him to wait and promised to find a way to take the orb out of him.[5]

Lance, per Tabitha's order, was to go with Maxie to stop Archie from drowning the island. Lance revealed himself when he told Archie about Kyogre's rampage while controlling the Red Orb. Therefore, he met up with Brock, May and Max, who knew about his appearance. Upon seeing the tidal wave, Lance sent Dragonite to use Dragon Claw to free Ash from the helicopter. Lance went off to take care of things while the heroes needed to find Pikachu, who was still bonded by the Blue Orb. Lance faced off against Archie and angrily told him to give up the Red Orb he possessed. Archie refused and ordered Kyogre to attack them. But to his dismay, the Red Orb is soon bonded with Archie. As the two Ancient Pokémon were about to clash, Lance told Ash about Groudon's power to stop Kyogre's tidal wave was to protect the island and its reason why Pikachu was bonded by the Blue Orb was to help it to protect the island. Brock and May used both Beautifly and Mudkip to distract Archie long enough, allowing Groudon to knock Kyogre out with a Solar Beam. This ended the clash between Kyogre and Groudon, as Pikachu and Archie's Blue and Red Orbs were taken out. Everyone watched as both Orbs were finally shattered and the two Ancient Pokémon went their separate ways. After Team Magma and Team Aqua are finally disbanded, Lance finally told Ash and his friends about both Ancient Pokémon are trying to protect the land and the sea. Therefore, he claimed humans controlling both the Blue and Red Orbs towards both Pokémon and it returned to destroy the Orbs.[6]

Lance competed against Leon in the World Coronation Series held in Galar. After a fierce and intense battle with Leon, Lance lost and became the first runner-up of the match. When shaking hands with Leon, he revealed that he once trained in Galar's Hammerlocke Stadium, and being influenced by the historically traditional attire made him customize his own current outfit. He acknowledged Leon whom he referred to the audience as the strongest king.[7] 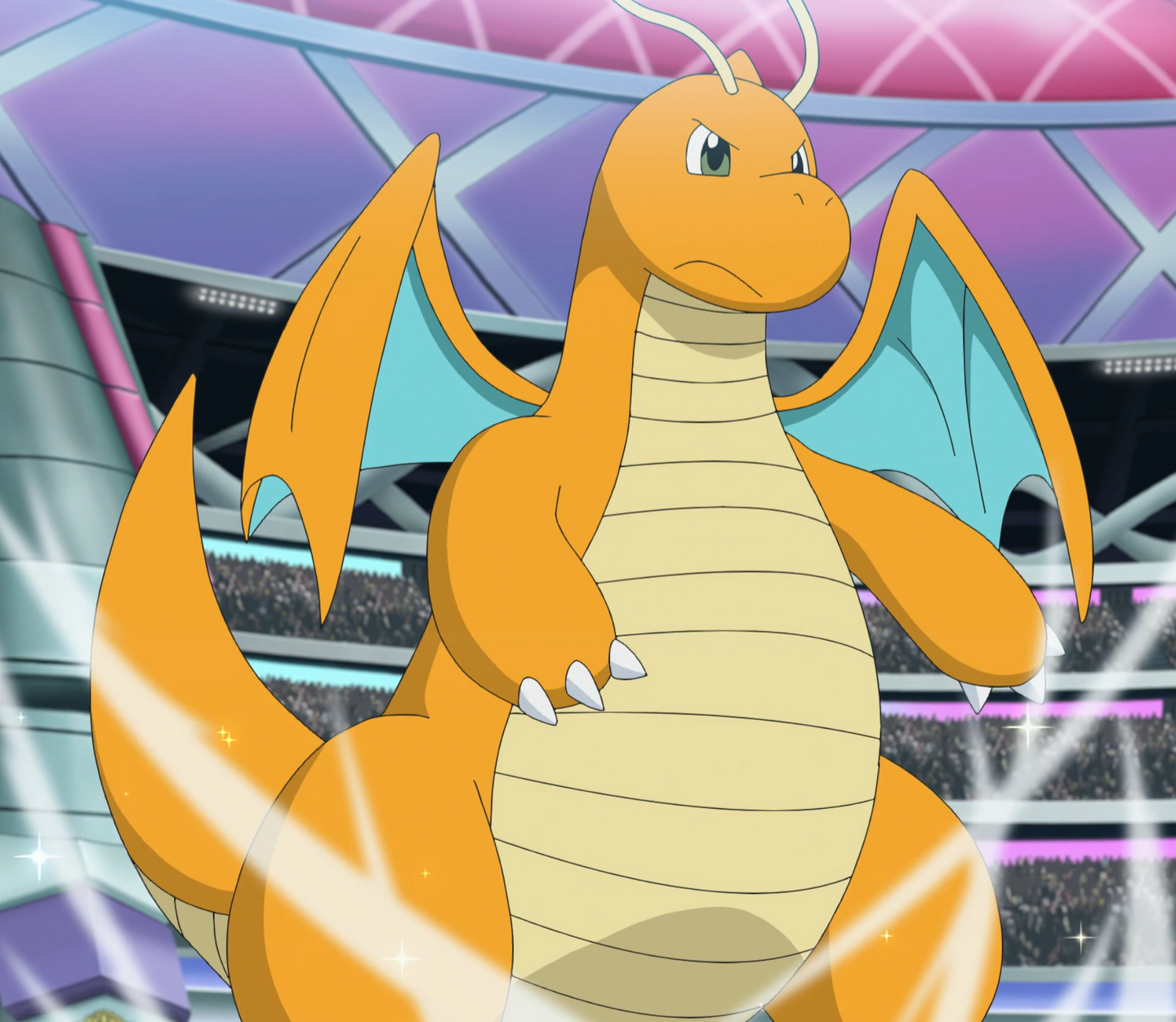