"…It's over. But it's an odd feeling. I'm not angry that I lost. In fact, I feel happy. Happy that I witnessed the rise of a great new Champion!"
— Lance in Gold, Silver and Crystal

Lance is a recurring character in Pokémon. He is a user of Dragon types, and stands as the final Elite Four member in Red, Blue and their remakes.

In Pokémon Gold, Silver, Crystal and their remakes, he stands as the Champion of the Pokemon League.

His outfit in Yellow is the same as it is in Red, Green and Blue.

His outfit in Crystal is the same as it is in Gold and Silver.

Lance wears a blue suit with orange color around his sleeves and on the chest area. He also wears a dark belt around his waist, some brown boots with orange heels, and a brown cloak, which is red on the inside.

He wears a medieval-looking navy blue tunic with red-orange trim, a brown belt around his waist, and large black boots with orange two rings around the top of each boot. The cuffs of his long sleeves are black with orange zigzagging trim separating the cuff from the navy blue part of the sleeve. He sports a long, flowing cape around his neck which is black on the outside and crimson red on the inside.

His outfit in Black 2 and White 2 is the same as it is in HeartGold and SoulSilver.

Lance is a very noble and respectful person. He is serious about his training and will not hold back his strength when it comes to battling any challengers. He is an expert at training Dragon-Pokémon, and is extremely skilled at battling. He believes that his inner-strength lies in his ability to professionally train Dragons, and he believes deeply in his Pokémon, that they are strong and superior. Despite this, he is a good sport, and will not become angry if he loses to the player character, but will instead gracefully accept defeat, and will happily congratulate them on defeating the Elite Four and becoming the new Champion.

The name "Lance" is literally "lance", a weapon often used by knights, who are, in turn, often associated with fantasy and thus dragons.

His Japanese name, Wataru, comes from 渡る (wataru, an uncommon way of saying "to end" in Japanese, as he's the final Elite Four member in Generations I, III, and VII and the Champion in Generations II and IV). Following the plant-based naming of most characters, it could also come from 綿 (wata, the Japanese name for cotton).

Lance is a member of the Elite Four in the Kanto region.

It is revealed that Lance has a cousin named Clair, who is the Blackthorn City Gym Leader, and who also specializes in using Dragon-type Pokémon. In the two years between Red, Green and Blue and Gold and Silver, he became the Champion of the Johto region.

Lance is the 4th member of the Indigo Pokémon League, and can perform attacks with his Dragon type Pokémon.

In HeartGold and SoulSilver, he and Clair will fight a double battle against the player character and their rival.

In Black 2 and White 2, Lance makes an appearance in the Champion Tournament in the Pokémon World Tournament, having a full team of his signature type, Dragon.

Lance is still the fourth member of the Elite Four of Kanto. 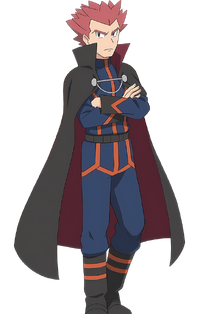 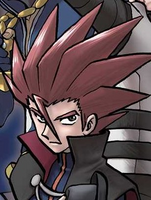 Lance's VS sprite in Red & Blue

Lance's VS sprite in Yellow

Lance's VS sprite in FireRed & LeafGreen

Lance's back sprite in HeartGold & SoulSilver

Lance's chamber in Let's Go, Pikachu and Let's Go, Eevee.
Add a photo to this gallery
Retrieved from "https://pokemon.fandom.com/wiki/Lance?oldid=1428926"
Community content is available under CC-BY-SA unless otherwise noted.