Lana is a Trial Captain that specializes in Water type Pokémon. Lana appears in Pokémon Sun and Moon.

Lana is a short and slender young girl with fair skin, blue eyes, and short blue hair, the latter in which she wears a yellow string headband that resembles a fishing net. She wears a short blue cape behind her back, a sleeveless white sailor shirt on top of a dark blue swimsuit with a blue fish decal in the middle of the chest, and long blue pants with a yellow string near the waist (from which hangs a badge shaped like her Trial Captain symbol) and blue Hawaiian wave patterns on the bottoms. On her feet, she wears darkly-colored rubber sandals that are too big for her. She is also often seen with a fishing rod.

Lana is dedicated to her family and is a reliable older sister who watches over her younger twin sisters. She is fairly timid at times but does her best to prove her skills as a Trial Captain. She also likes to jokingly tell stories of false events which is up to the player to believe it or not.

Lana meets the player character at the start or Brooklet Hill, where she has to be followed. She stops near ponds twice and says she hears a Pokémon splashing for help. The player character has to summon a Lapras and swim towards the source, then battle Wishiwahi both times. Then she leads to the Trial start, and says the player character can't leave after going in. One has to swim to the whirlpool, where the Wishiwashi school forms. After beating this Totem Wishiwashi, Lana awards with a Waterium Z. One can battle her when finding her house and her sisters entice her to do so. 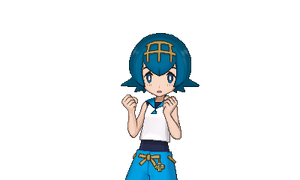 Lana's VS sprite in Sun & Moon

Add a photo to this gallery
Retrieved from "https://pokemon.fandom.com/wiki/Lana?oldid=1277222"
Community content is available under CC-BY-SA unless otherwise noted.