Template:Kyurem Kyurem (Japanese: キュレム Kyuremu) is a Dragon/Ice-type Legendary Pokémon and the highest leveled stationed Pokémon in Pokémon Black and White (Lv. 75) and the third highest leveled stationary Pokémon of all time, surpassed only by Arceus and the Magikarp in the Resort Area in Pokémon Platinum. The player must navigate through an extremely difficult maze to get to the Giant Chasm and thus, Kyurem. It has three signature moves, the most of all Legendaries. They are Freeze Shock, Ice Burn, and Glaciate. In Pokémon Black and White Versions 2, Kyurem has two different forms that can be created by fusing ether Reshiram or Zekrom using a Gene Wedge. Those special forms are known as Black Kyurem and White Kyurem. Its type remains the same in Black and White Kyurem; Dragon/Ice

It is portrayed with a possibly damaged wing and horn because in one of the legends you learn in the game is that Kyurem crashed on Earth in some sort of ice comet; this possibly means that Kyurem broke part of its wing and horn when it made impact. Its wings are wrapped around its arms and appear to be made of an ice-like substance. However, an NPC in Pokémon Black 2 and White 2 stated that this legend may be not quite true, and Kyurem is actually the corpse of the original dragon Zekrom and Reshiram split from; which can be stated in the pokédex entries: This legendary ice Pokémon waits for a hero to fill in the missing parts of its body with truth or ideals, which shows that Kyurem wishes to reunite with Zekrom and Reshiram. It has two fins by its neck with a small yellow streak down its head. Ice covers its face completely except for its eyes, which are yellow. Additionally, Kyurem has two other forms in which can be fused with either Zekrom or Reshiram. It can change form by using the DNA Splicers (Drayden's family treasure) to turn Reshiram or Zekrom back into the Light Stone or Dark Stone and then merging with it. The process can also be reversed. In Black and White Versions 2, when under the control of Ghetsis, it appears to turn into some sort of awakened form where it's wings are revealed to be node-like appendages that absorb energy, as well as fiery tendrils of energy which it uses to trap Zekrom/Reshiram, then absorb them.

Kyurem has no known gender.

Kyurem lives in the Giant Chasm which is in the eastern part of Unova region.

The people of Lacunosa Town tell the story that long ago, Kyurem would take people from the village and eat them by cooling the night's air. It is possible though that this is just a legend and thus is not true.

Kyurem does not evolve.

{{GenVPokédex |backcolor = 7340BF |border = 7DD3E8 |name = Kyurem |black = It generates a powerful, freezing energy inside itself, but its body became frozen when the energy leaked out. |white = It can produce ultracold air. Its body is frozen. 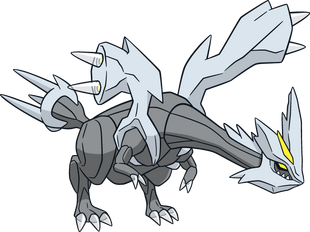 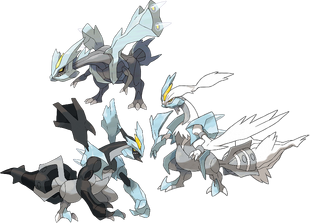 Kyurem and forms
Add a photo to this gallery